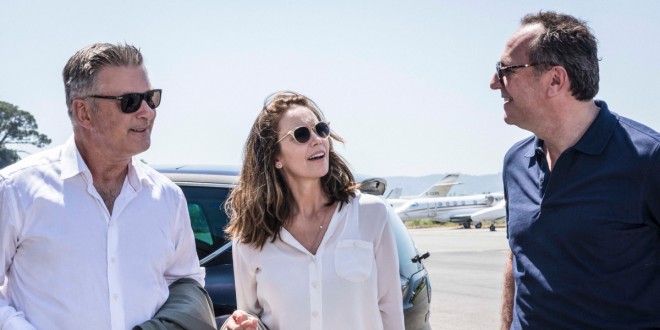 81 year-old Eleanor Coppola’s divine confection of a romantic jaunt from Cannes to Paris will titillate gourmands, oenophiles and those just loving a saffron, honey-infused excursion through idyllic France.

Diane Lane is positively blissful as “Anne”, a woman of vast equanimity, flowing gracefully through life, defined by her high-powered, movie producer husband “Michael” (minimal role but well cast, Alec Baldwin); because of faulty ears, she accepts a ride to Paris with a business associate of Michael’s, “Jacques” (entrancing performance by French actor/director Arnaud Viard); thus commences an enchanting road trip, blanketed with flirtatious, enticing, sapient conversation, cuisine and wine celestially worthy of the gods. Jacques, in every sense, ignites Anne’s epiphany; she savors their lunches, picnic and gloriously decadent dinner; Jacques luxuriates in her presence, aura, asking her questions that demand contemplation to respond; she basks and blooms under his scrupulous attention, enjoys but never succumbs to his glib, meaningful flattery; she is remarkable, a woman of substance, unaffected by Hollywood, in tune with her age, capabilities, Jacques nurtures qualities, simmering beneath the surface, yet to evolve; he intuits the greater Anne, a woman still in the embryonic process, imagining the magnificence of the future Anne.

Coppola’s “Paris Can Wait” fascinating in its reminder that to fully imbibe in life’s treasures one must periodically “stop the world” step away and “smell the roses.”