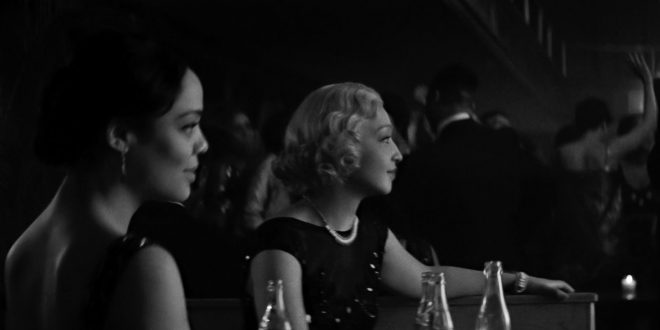 Two well-to-do women connect after a chance meeting in a New York City hotel; educated, poised, living lives of affluence and grace in the 1920’s; they are black, but one has lived as a white woman. Director Rebecca Hall with an iron will in a gloved fist treats Nella Larsen’s 1929 novella, “Passing” with intuitive discernment, idiosyncratic style, intriguing complexity; “Irene Redfield” (Tessa Thompson) comfortable in her hue, enjoys her days, running her brownstone (with household help), overly protective of her young sons and feisty, unruly husband “Dr. Brian Redfield” (Andre Holland); there is a quiet, subtle undercurrent of discontent, fighting to surface and disrupt her tranquil domesticity. “Clare Kendry” (Ruth Negga) a school-mate from the past, bamboozles Irene and becomes a lightning rod in the Redfield household; she has passed as white and coddles her racist white husband “John” (Alexander Skarsgard); Clare is the proverbial “loose cannon”, daring the world to guess her secret; her consummate beauty, precocious wit, immaculate skill sucks the unexpected into a tangled web, impossible to unbind.

“Passing” blazingly filmed in black and white, is anything but; Thompson and Negga are sublimely intense, finely-drawn in their interpretations, triggering the deepest of sentiments, insecurities, and complexities, they have excavated unchartered emotional caverns; blatant racism, “ghettos”, tempered by Harlem’s Renaissance; the Jazz age bewitched the population throughout the 1920’s and Harlem was a hotbed of dance, song and imbibing between the races. Irene and Clare are queens of nuance, straddling two worlds, masked, unmasked and indecisive as to where their allegiance should lie.

There is an unsatisfying allure to “Passing”, which makes it even more satisfying as time and pondering refuses to answer ardent questions.