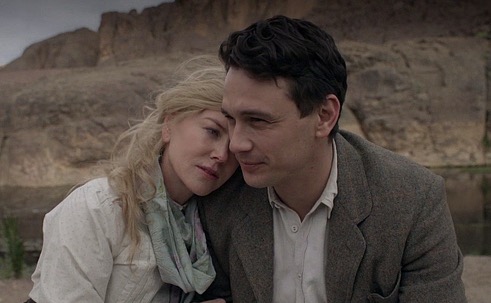 QUEEN OF THE DESERT (ON DEMAND) & IN THEATRES

Gertrude Bell (1868-1926) was a woman among men, born into restricted British aristocracy; brilliant, Oxford scholar, bored with the limited horizons of a young Victorian woman; she escapes to Tehran, Persia in 1892, where her uncle was the British ambassador; free, her intellect soared, and for the rest of her life Orientalism and its enigmas taunted her taste buds, ignited her massive curiosity, anointing her the sobriquet, “Queen of the Desert”. Her accomplishments were, even in this age, astounding: master of six languages, she conversed in Arabic with tribal leaders, befriended T.E. Lawrence, joined Winston Churchill in defining the boundaries of Iraq; aided in the establishment of the Natural Museum of Iraq; a confidant of King Faisal; she was a diplomat, archaeologist, poet; a prolific writer, historian; her vision, searing drive was spellbinding, its potency has grown exponentially.  To truly grasp her magnitude one must read Janet Wallach’s “Desert Queen”.

Alas, my expectations for the film were drastically dashed, possibly falling into “a little knowledge” syndrome; I wanted the fire, gusto of Gertrude to pulsate from the screen. Nicole Kidman is passable but lacked the intensity, exceptionalness of this awe-inspiring, phenomenal woman. The film, directed by Werner Herzog, stunningly, lovingly depicts the tribulations of Gertrude’s treks through the desert; her quest to grasp the Bedouin culture, but sinks to the tiresome and monotonous.

Too much time is given to Gertrud’s relationships; James Franco is weak and insipid as Henry Cadogan, her first love, rejected by her father (she could not sever that bond of familial approval); Robert Pattinson is a poor excuse for T.E. Lawrence (Peter O’Toole, chuckling from beyond); Damien Lewis imbues Richard Doughty-Wylie with the proper ardour to lure Gertrude into a fine romance;  ultimately, marriage alluded her.

“Queen of the Desert” awakens one to the rapture of the desert; a woman’s quest to live in a world without boundaries, and write about it exquisitely:”To wake in that desert dawn was like waking in the heart of an opal, see the desert on a fine morning and die—if you can.” Gertrude Bell died on July 12, 1926 and is buried in the British cemetery, Baghdad.