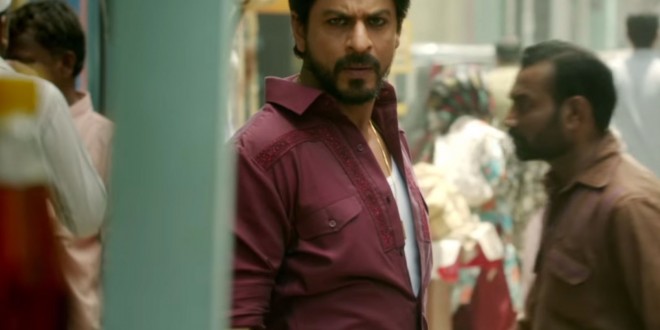 At fifty-one, Shah Rukh Khan is incandescently comfortable in his role as “King Khan”, his recent films have shown the breath of his talent and understanding of the human condition: subtly sensational as a physiatrist in “Dear Zindagi”, mesmerizing in a dual role as stalker/star in “Fan”; riveting as a good-hearted bootlegger, “Raees” in Gujarat, India; a state that adheres to the Bombay Prohibition Act (1949), its “dryness” yields one of the highest rates of alcoholism in India. Egregious graft nurtures illegal libations, oozing daily, by the gallons, into this multi-faceted state.

Raees a shrewd boy from the streets, joins, from the age of ten, the kingpins of crime; from the hierarchy of elected officials to the smallest ring in the circle, Raees perspicacity is keenly polished. His woes commence when he starts his own smuggling operation. We see Khan at his best as he woos and weds “Aasiya” (sinewy Video Jockey, Mahiya Khan, no relation to Shah Rukh) sensational musical score by Ram Sampath); demolishes scores with Jackie Chan aerial acuity; disperses bounty with Robin Hood largesse; he is a loveable villain, but a miscreant, nonetheless.

Director Rahul Dholakia’s “Raees” fearlessly addresses the insidious acceptance of a fraudulent, corrupt ideology, versus the few who strive to correct its untowardness.

The film belongs to Khan. He has made over 80 Bollywood films; from goofy to sublime I have always preferred his roles focusing on the darker side: “Darr”, “Baazigar”, “Duplicate” another staggering double role, confusion between the two is anathema to his characterization. “Raees” highlights his remarkable blending of “Lothario”, “Don” and “Guru”, resulting in a confection of scintillating entertainment.