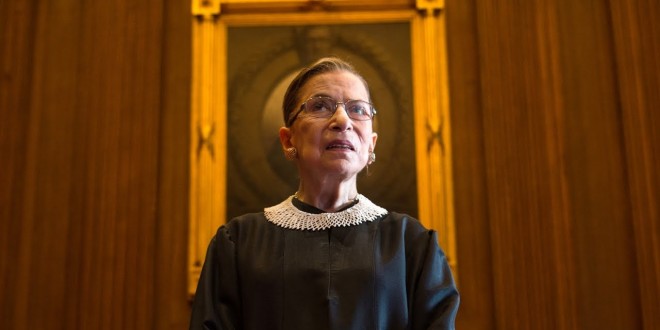 Amazing, that this tiny, wizened vessel houses one of the finest legal minds of the twenty-first century. Ruther Bader Ginsburg, born in Brooklyn, 1933, the beautiful second child of immigrants, soared from an early age until the present. She is a mega-force as a Supreme Court Justice (appointed by President Clinton in 1993), now known more for her dissents than affirmations. Directors Betsy West and Julie Cohen have created an in-depth portrait of a woman who has fought her entire life for the elimination of gender bias. Women and men have benefitted from her tenacious, instinctive prowess (1975, Weinberger v Wiesenfeld, granting widowers the same rights as widows, while caring for a minor child); women’s advancements have exploded because of her tenure on the court; she torpedoed the Virginia Military Academy’s rule denying woman equal access to their program; her championship continues to ignite women’s equality.

“RBG” is also a stellar love story: Ruth Bader married Martin Ginsburg, her college sweetheart who recognized and relished her intelligence on their first date, from their wedding in 1954 until Marty’s death in 2010, theirs was a partnership that grew exponentially through the years.

Filmed with skill, lacking a pejorative stance, we move with Ruth from the present, as a modern day rock star, lionized by millennials, to flashbacks of an icon in the making: from the top of her class at Cornell, first female member of the Harvard Law Review; raising her daughter and caring for Marty, after testicular cancer struck him while in law school (he was a year ahead of her at Harvard and she took notes in his classes while never missing her own); Director of the Women’s Rights Project of the American Civil Liberties Union; appointed to the U.S. Court of Appeals by President Carter in 1980 and the rest, as perpetually stated “is history.”

“RBG” embraces her as a woman; exercising, conversing with her granddaughter, sharing her passionate love of Opera, which was a binding force, cementing her friendship with her polar opposite, Justice Antonin Scalia; never allowing philosophical differences to determine her friendships.

2015’s “The Notorious RBG: The Life and Times of Ruth Bader Ginsburg” by Irin Carmon and Shana Knizhnik is a keen, insightful look at an individual who, following the advice of her mother, was always a lady, speaking softly, cherishing her independent spirit; “RBG” is a joyous romp, an expose of  a woman known for shattering parameters, barriers that never should have existed.