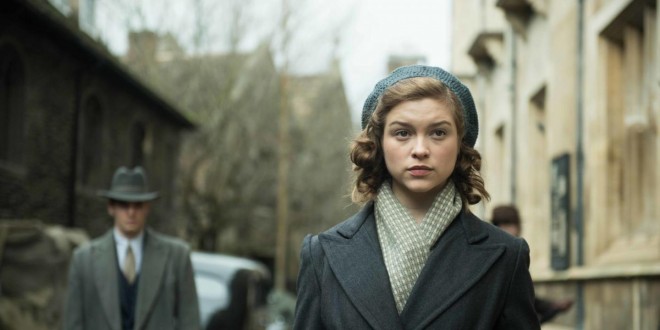 Ambition and over simplification stymied what should have been a legitimate political thriller; that being stated director Trevor Nunn and an inimitable cast, lend viability to the true story of a remarkably brilliant woman (Joan Stanley) who helped with the development of the atomic bomb, shared its secrets with the Russians, loved a misguided idealist (Leo), married a professor (Max) and lived anonymously, happily, well into her eighties, when her traitorous subterfuge is uncovered by the British Secret Service in the year 2000.

Judi Dench is pungently empathetic as an elder stateswoman brought to the fore, after a life of equanimity is shattered by the veracity of her youthful misdeeds; as a student at Cambridge in 1938, she succumbs to the magnetism of Russian patriots, cousins Sonya (Tereza Srbova) and Leo (Tom Hughes); unsophisticated, naïve Joan (Sophie Cookson, a talent worth concentration) is bamboozled by their oratory and glamour; Hughes is particularly charismatic as a gilded, disillusioned lover, incapable of convincing Joan to join the Party.

This was the “worst of times” and Joan’s egalitarian decisions, flawed, but made for moralist reasons, have fortuitously prevailed with the ageing universe.

Regrettably, “Red Joan’s” vision evaporated with a flimsy script and despite the actors’ skill, waned into amorphous, unmemorable characterizations.