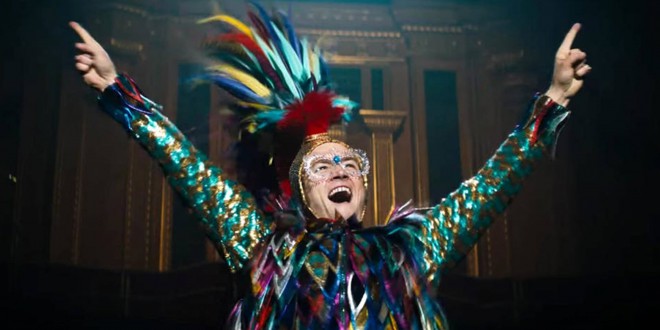 Taron Egerton gives an orbital performance as “Rocketman”, Elton John/Reginald Kenneth Dwight; throughout the film, bloated with schtick, gaudy displays of wealth, “sex, drugs, rock and roll” Egerton brilliantly, presciently maintains the aura of a wounded, pristinely fragile, insecure, unloved, little boy. Commencing  when John voluntarily enters a rehabilitation facility, and through a series of insightful flashbacks we visit and emotionally invest in his life: coldhearted, untouchable father (Steven Mackintosh), a “tartish”, unappreciative mother (Bryce Dallas Howard) a grandmother (Gemma Jones) wise enough to cater and recognize Reggie (marvelous Matthew Illesley) as a prodigy; fame engulfs him at twenty-three; no one can be prepared for idolatry, instantaneously smothering, unbridled, unrestricted worship at an age when life’s choices are undefined; Egerton is profound in his interpretation of John, dazzling, electrifying, stratospherically dynamic with every concert and ruptured lifestyle.

“Rocketman” magnifies the inability of individuals incapable of accepting themselves, calluses and dimples, as they are; only with self-awareness can the threshold of insecurity be bested, allowing others an authentic portrait worthy of recognition, respect and love.