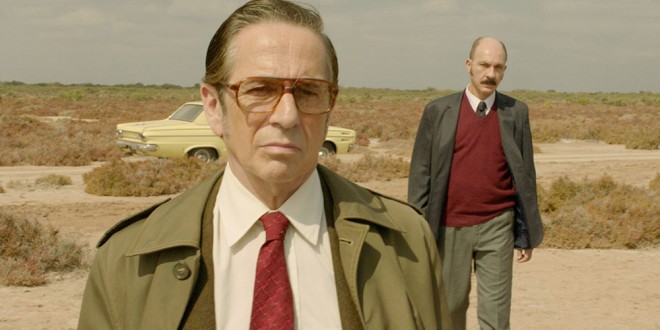 “Oh what a tangled web we weave, when first we practice to deceive!”

Argentina. 1975. A home is stripped of its accessories, by disparate individuals; a metaphor for the ultimate disappearance of Argentines with left wing political ideals, leading to the “Dirty War” (1976-1983) a United States-backed military coup d’état, (overthrew Isabel Peron) clandestinely supporting state terrorism; a murky blot on U.S. history.

“Claudio” (brilliant, intelligent portrayal by Darion Grandinetti, “Talk to Her”) a renown lawyer, is accosted by a highly erratic young man (Diego Cremones), in a restaurant, as he waits for his tardy wife,  “Susanna” (Andrea Frigerio); he relents and gives his table to the obnoxious interloper; with aplomb, he proceeds to verbally vivisect, and forecast the ugliest demise for this immensely disturbed young man; his erudite, calmly delivered tirade, unknowingly results in compromising his moral compass.

Director Benjamin Naishtat’s tapestry of deceit, subterfuge, iconic intrigue subtly touches on a society tottering on the brink of annihilation; infused with religious references: the desert, implying Christ’s forty days spent purging Satan’s temptations; Claudio visits the desert twice, alluding to contamination and redemption; “disappearance” informs the narrative: unidentified homeowners; a teenage boy goes missing and in tandem a “magical” vanishing trick goes awry; an unstable artist cannot be found. The catalyst for solutions, “Detective Sinclair” (Alfredo Castro) eerily, creepily seems cognizant of the answers before formulating the questions. He represents the conscience of an unstable, corruptible populace, a country accessible to Nazi sympathizers; communists “Rojo” (American word for communism, in the 70’s) lurk in the center of the subsequent coup.

“Rojo’s” titillation, fascination revolves around a country in flux; an eclipse, momentarily erases the toxic milieu, for a nanosecond, alleviating Claudio’s disturbing dilemma; his fate, career now rests in the decision of a righteous prophet.