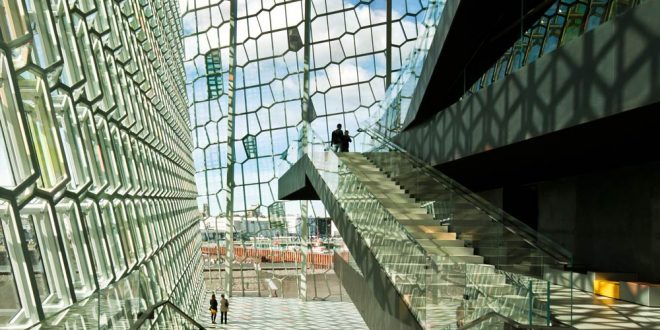 This is NOT a film review; it was a time of rejuvenation, a time to doff, escape the norm, the perpetual titillation of movie manna; deliverance from the cacophonous mayhem of city life: cars, motorcycles, souped up vehicles, whose only purpose is the annihilation of peace; a time to “stop the world” and wallow, effortlessly in a landscape guaranteed to heal, bless, the most wounded, weary, fatigued spirit. Iceland, with barely 350,000 inhabitants is a sturdy island, ruled by its volcanos, geysers, waterfalls; wonderous nature is a sovereign, mercurial dictator, an element of fear and uncertainty percolates at its median; throngs invade and scale its deliciously inviting trails, glaciers, icy lagoons; it is a paradise for the young, fit, adventuresome. My quest had nothing to do with athleticism; Olafur Eliasson (b.1967) was the magnet that drew me to the island; an artist of blazing, awe-inspiring ingenuity, whose formidable installations heuristically transform one’s perception, conception of contemporary art; seeing the terrain that informed his genius was my goal; it was met a thousand-fold: water, ice, glass, light, sun, movement vibrantly palpitate in his voluminous oeuvre. Driving on virginal roads, eerily sacrilegious encountering unexpected, miraculous, deifying structures; Eliasson imbues his every triumph with Iceland’s celestial beauty; the Harpa Center in Reykjavic shimmers with colored glass, roused by Iceland’s basalt topography; more than breathtaking Eliasson’s vision convinces one that indeed, there is a higher power.