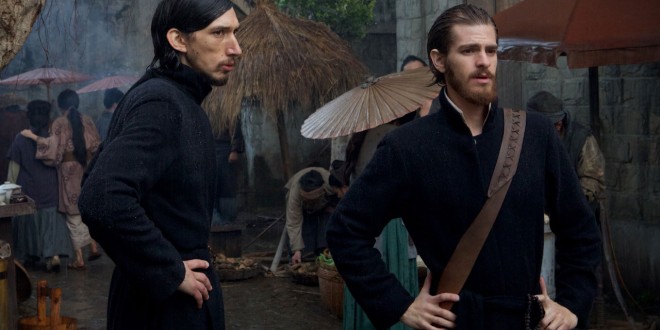 Director Martin Scorsese’s “Silence” is terrifying; every scene reminiscent of history’s horrific dossier of those who perished because of their faith, or refusal to acquiesce, convert to the dictates of the conquerors, church or crown; Roman Emperor Nero, slaughtered Christians, 37-68 AD; Jews have been persecuted from the Hellenistic period (323BCE) through 20th century’s Holocaust; Muslims, targets of the Crusade annihilations  (1095-1291); Spanish Inquisition, which egregiously lasted from 1478-1834, commencing with Ferdinand and Isabella’s sweeping decree to purge Spain/Portugal/Iberian Peninsula of its Jews, especially, the Marranos/Conversos who publically practiced Catholicism but continued privately to adhere to Judaism.

“Silence” is the epic tale of two seventeenth century Jesuit priests “Father Rodrigues” (Andrew Garfield) and “Father Garrpe” (Adam Driver) venturing to Japan in search of “Father Ferreira” (Liam Nesson), who has converted thousands of Japanese to Catholicism. It is 1645 and Christianity has been banned by Japan’s Buddhist hierarchy; those who refused to renounce the precepts of Catholicism were tortured (creatively) including missionaries who transformed them. Rodrigues and Garrpe, with only their blind and intransigent faith to accompany them, leave Portugal, landing on the apostate shores of Japan.

“Silence” is a study in ambiguity, based on the 1966 novel by Shusaku Endo (1923-1996), a Japanese Roman Catholic who questions Christ’s stern reticence when beseeched to save, soon to be martyred Christians. The padres religious indoctrination is so intense, they believed with every fiber of their being, that anyone who refused conversion were perpetually banned from Paradise or a peaceful afterlife.

Garfield, Driver and Issey Ogato (Inquisitor) grasp the intricacies of their roles but the conversations between Rodrigues and Ferreira are pivotal in touching the intellectual, philosophical core of the Japanese perspective.

Difficult to watch but profound in its realization that religion is the most personal, private possession owned by man; it is subjective and should not be interfered with, tread upon, or questioned by any form of proselytization, regardless of worthwhile intentions.