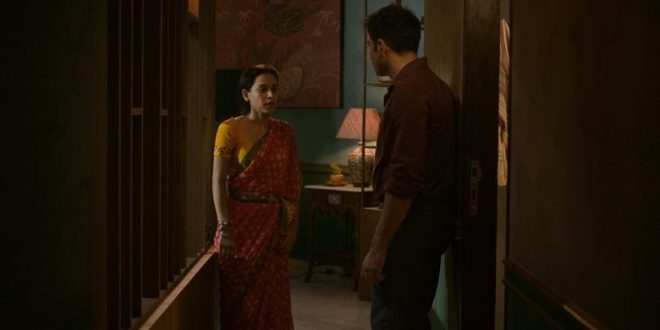 Abashedly, I have neglected Bollywood in this era of pandemic trouncing, but director Rohena Gera’s 2018 “Sir”, has awakened my longing for the scents and enchantments of multi-faceted India: murky, mystical, poignant pollution seizes with its ineluctable tentacles, as one exits the airport, slipping into the blackest of night’s moments; if open to its charismatic, beguiling caprices, a part of one is forever lost in its captivating, enthralling aura.

“Sir” gifts viewers one of the screen’s most bewitching protagonists, “Ratna” (award winning portrait by Tillotama Shome), a widow (hordes treated abysmally and considered inauspicious) from a small village, employed in a Brahmin household in Mumbai; she is subservient, kind, and innately good; her wages contribute to her sister’s education; her employer “Ashwin” (Vivek Gomber), morose after a cancelled wedding finds comfort in her attentiveness, industry, awareness of human frailties; unseen by family members, her caste solidifies her invisibility; Ashwin, sees beyond her circumstances, recognizing attributes others would not bother to observe; he purely, simply falls in love with her. Wisdom seethes at the core of “Sir”; Ratna is not a Bollywood beauty; her glow emanates from her caring soul, uncluttered by life’s trivialities; she is an aphrodisiac for Ashwin’s ennui.

“Sir” with Gera’s feminine perspective erases the tableaus, segregating the castes, opening, and championing the time proven axiom of attraction between opposites.