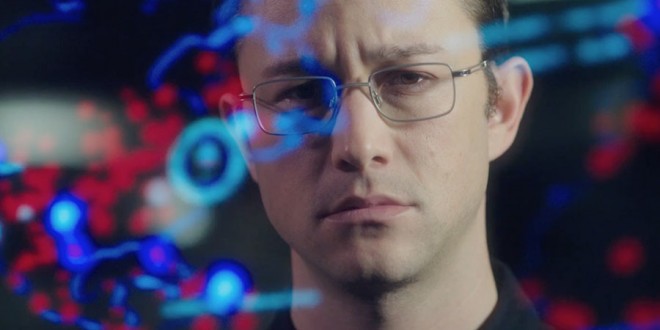 There have been “whistleblowers” throughout history but the twentieth and twenty-first century have brought many to the fore, lionized or demonized, they have changed the course of history: Mark Felt (aka “Deep Throat”) Daniel Ellsberg, Karen Silkwood, Linda Tripp, and Edward Snowden, the man who in 2013 unleashed secret security documents relating to NSA’s policing policies (Big Brother antics) throughout the globe. Oliver Stone’s “Snowden” lacks the powerful pungency of Laura Poitras’s, 2014 academy award winning documentary “Citizenfour”, but still succinctly dissects the motivation at the heart of Edward Snowden’s decision; Joseph Gordon-Levitt as Snowden gives a powerful, controlled depiction of a man whose conscience led him to betray the boundaries of his position, his “whistle blowing” is still screeching redolently today, as he lives and longs for a pardon within the parameters of Moscow’s restricted Federation.

The film’s, rambling and unfocused commencement improves with Snowden’s relationship with Lindsay Mills (a simplistic performance by Shailene Woodley); she provides a moral barometer, igniting his “inner liberal”; knowing little of his profession,  Snowden is smothering in angst as he slips into a quagmire of unchartered righteousness, realizing that she is the ultimate sacrifice.

Tension mounts in the claustrophobic confines of a Hong Kong hotel as Snowden is filmed by Ms. Poitras (Melissa Leo, perfectly cast) with The Guardian journalists Glenn Greenwald (Zachary Quinto) and Ewen MacAskill (Tom Wilkinson);  the magnitude of their unveiling, grows exponentially with the passing of each sacred second, never to be retrieved or redeemed.

“Snowden” is an interesting, intriguing analysis of a millennial man who followed his instincts, eliminating personal gain; more fascinating is the shifting of public opinion from the negative to positive, relating to his decision. Whether his vast remaining years (birthdate, June 21st,  1983) will be spent in Russia is a conundrum yet to be decoded.