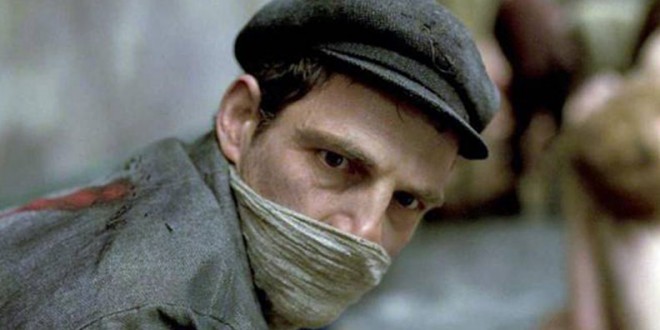 Emotionally pulverizing, even after the third viewing, “Son of Saul” Hungary’s nominee in the Best Foreign Film Category, is my selection for the Academy Award; thirty-eight-year-old Director Laszlo Nemes, shooting on 35 millimeter film, drags viewers through the stench-filled, suffocating, filthy, claustrophobic corridors of dehumanization… Auschwitz-Birkenau concentration camp. Listening to the sounds of savagery, wreckage,  howls of the innocent, wracks one’s sensitivities to the bleeding point.

It is 1944 and “Saul” (mesmerizing, haunting portrayal by poet Geza Rohrig) finds a young man, not quite dead, but soon annihilated by a demonic Nazi physician; Saul, claiming the boy is his son, hides the body, while he hunts for a rabbi to officiate at a proper Jewish burial.  Saul has survived the inevitable by being a member of the Sonderkommando (Jews forced to aid in the elimination of fellow Jews), desensitized, his humanity and history erased,  immune to the atrocities he’s witnessed and committed; the boy is a metaphor for salvation, a tiny thread of dignity, a quest for what once was, a culture condemned and cataclysmically slaughtered by harbingers of iniquity; this one act could possibly restore his soul.

“Son of Saul” is a unique, solitary, Holocaust story; eliminating the masses, the volumes of pain cataloged, viewed for  seventy years; for thirty-six hours we walk with Saul, and exponentially our admiration grows as we experience his horrific tests, squelched hopes. Saul is a metaphor for fortitude, life; beneath the grime and gore lie a shred of purity, godliness inherited from his ancestors; a stalwart heritage that continues to thrive, while civilizations wanting their eradication, have shriveled and died.