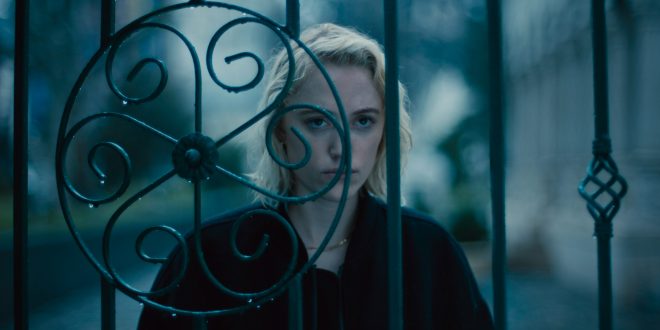 Isabelle Fuhrman gives a sensationally eerie depiction of a serial killer afflicted with Highlander Syndrome (hypopituitarism, stunted physical growth); she looks twelve but is thirty-one; an orphan from Estonia who poses as an American child, abducted years ago; Julia Stiles, “Tricia” the despondent mother, is equal to the challenge of a newfound daughter. The film’s circuitous plot is pleasingly titillating and surprisingly unpredictable.

“EMILY THE CRIMINAL”  (in theatres)

Shamefully unaware of actor Aubrey Plaza I was emotionally squashed by her role as “Emily” suffocating from student loans, unable to find a position because of her criminal record, succumbing to credit card fraud, lured by charismatic “Youcef” (magnetic Theo Rossi) and acquires a prohibited taste for the financial rewards of an untoward lifestyle. Her pungent performance and prescient director John Patton Ford generate a film of certifiable strength and legitimacy.

Maika Monroe, “Julia” is breathtakingly splendid as the wife of a Bucharest businessman “Francis” (solid, Karl Glusman) who suspects a neighbor (Brun Gorman) of creepily watching her from his window. What commences benignly, morphs into a masterfully directed (Chloe Okuno) and terrifyingly performed psychological riddle.

Michelle Monaghan is worth the constant complexities of seven episodes. She plays the role of twins “Leni” and “Gina” who switch personas on their birthdays yearly; in essence living two lives. Leni goes missing and Gina flees to the rescue, resulting in depicting both sisters, simultaneously.  Obfuscations abound, stunning secrets revealed as the scenario bounces from childhood, adolescence, into troubled adulthood. Monaghan, at her professional peak, is captivating as two inveterate, damaged individuals.

2022-08-23
Peneflix Admin
Share !
Previous: VENGEANCE (in theatres)
Next: A THOUSAND YEARS OF LONGING (in theatres)