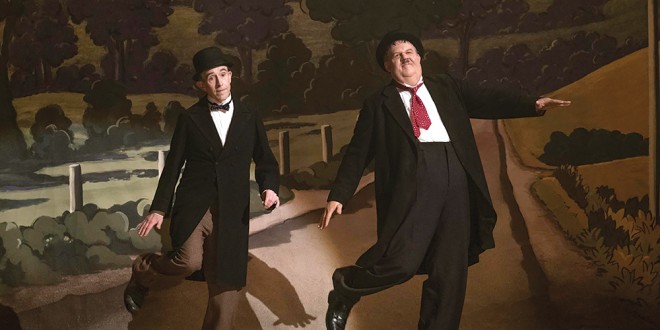 Having missed the idiosyncratic era of “Laurel & Hardy” director Jon S. Baird’s “Stan & Ollie” biopic stuns with a profound poignancy; stars, John C. Reilly (Oliver Hardy, 1892-1957), Steve Coogan (Stan Laurel, 1890-1965) synchronize, incandescently the comedians hilarious, slapstick routines; from 1927, until their final road trip (“Birds of a Feather”) in 1953/54, their ingenious “schtick”, in over thirty films, seized the imaginations and adulation of countless viewers; the last tour, strips to the core, the heights and depths of the voyage: the early days of stardom where the studio owned your soul, paid a pittance, and could ruin a career with a dash of a pen; even neophytes will empathize with the energy, creativity and astute intelligence (Laurel did most of the writing) of this virtuoso pairing.

“Stan & Ollie”, more than a partnership spanning decades, is a love story; Steve Coogan, “Stan” in the finest performance of his career, woos Hardy, after a severe altercation; his love for the man is palatable and heart wrenching.

“Stan & Ollie” is a film for those interested in the embryonic genre of comedic duos, Laurel and Hardy forecast the birth of: Abbott/Costello, Hope/Crosby, Martin/Lewis, Wilder/Pryor, Fey/Poehler.  Here is an exhilarating, entertaining, exuberant homage to men worthy of the allegiance.