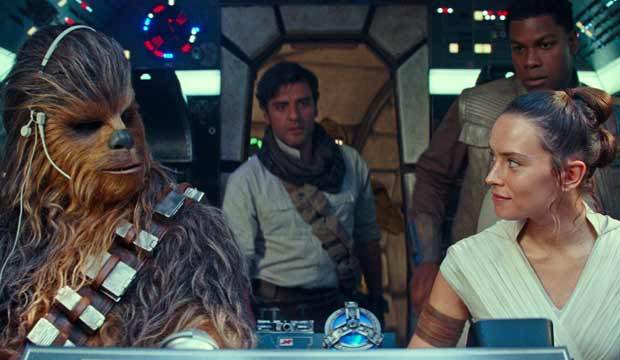 STAR WARS: THE RISE OF SKYWALKER

Since 1977, “filmites” have been invested in a “galaxy, far, far away” and have experienced a franchise that has grown exponentially through the decades; director J.J. Abrams complication of past scenarios is “out of this world” to view, tweaked historical references infused with present digitalization enhancement, lend freshness to an inflated, fantastical tale; protagonists and antagonists have died, their progeny have come to fruition; comfortable familiarity is achieved presciently; a soundtrack anchored in memories of those who no longer have them.

The “Star Wars” phenom is personal, subjective; reasons vary by the widest of margins: cinematography, scientific ingenuity, character development; my reasons are the “darkest”, my mantra, “the brighter the light the darker the shadow”, a character’s shadow and its inception, holds the highest intrigue; “goodness”  can be benign, syrupy, predictable. My attendance rests solely with Adam Driver as “Kylo Ren” his magnificent, plaintive villainy scorches with magical intensity. 2019 has been the year of Driver, his brilliant versatility including “Star Wars”, can be seen in “The Report”, as FBI agent Daniel Jones, ferreting out egregious torture by the CIA on suspected terrorists; pejoratively, I feel he has earned and deserves the Academy Award for Best Actor in “Marriage Story” ; his portrayal of soon-to-be-divorced “Charlie” cannot be bested.