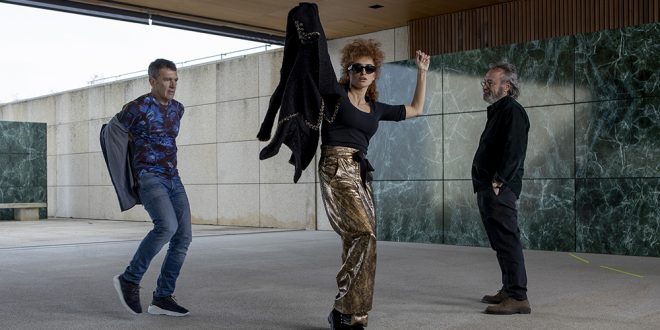 A timely tale resonating with today’s invasive and chilling technology; a rising politician is surreptitiously filmed as she and her lover are carnally entwined on a deserted beach. Predictably, it goes viral, and the series evolves as the protagonists gallantly fight to resolve and cope with the consequences. Itziar Ituno as “Malen Zubiri”, the deputy Mayor of Bilbao, tackles with gloved claws those who expect her to step down from her position; she committed no crime and valiantly refuses to be intimidated by the testosterone driven politicians and press. A subplot simmers with a woman seeking justice for her sister’s suicide; another prurient video leading to the ruin of a woman lacking the mettle of Malen.

“Detective Colette Cunningham” (outstanding, Paula Malcomson) discovers her estranged daughter has committed suicide; with chilling, unflappable skills, she dissects the circumstances and the nefarious surrounding her death. Written by Sean Cook “Redemption” will satisfy those craving a no nonsense, gritty, female detective; she bests her male counterparts while maintaining her femininity.

Director John Michael McDonagh capitalizes on the term “the idol rich”: indolent, spoiled, reduced to lazy, alcoholic meanderings in decadently, garish landscapes; “David and Jo Henninger”  (Ralph Fiennes and Jessica Chastain) on their way to a hedonistically induced weekend in Morocco, kill a young boy selling artifacts. Ralph Fiennes is transformative in the role and the reason to cling to his every scene; interacting with the father of the dead boy, allows his escape from his bitter, benign, inebriated existence into a realm of self-reflection, a cleansing, a purification. Unfortunately, the rest is meaningless fluff; the “rich” I have encountered are diligent, excessively hard working, generous to a fault; yes, capable of hosting grand parties, sharing their largess with those they esteem.

A seething satire on the movie industry; nothing, no one, not even viewers escape the viperous sting, some mortally: filmmakers, directors, actors, flawed but enterprising when addressing the surprising, shocking vicissitudes placed in their paths. Penelope Cruz is stylishly stunning as the quirky director “Lola Cuevas”; Oscar Martinez, actor “Ivan Torres” surpasses Antonio Banderas, costar “Felix Rivero”. The film soars with an ego-smashing scene, a metaphor, questioning whether their viability is inherently based on awards; both actors are immobilized and must question the tangible versus the intrinsic.