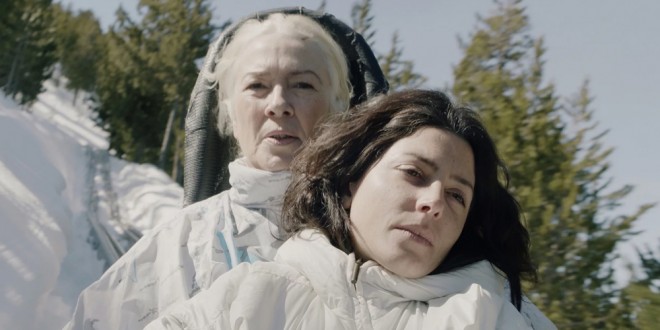 Director/writer Ramon Salazar’s “Sunday’s Illness” is as good as any film playing in today’s theaters; opening earlier this year at the Berlin Film Festival, Netflix’s prescience is a boon to those who crave watching excellence in one’s living room. Unlike any mother/daughter relationship you’ve experienced, nuances subtly revealed, profound performances, make this film a thrilling, psychologically titillating scenario.

“Anabel” (Susi Sanchez), elegant, wealthy, momentarily stumbles, through her palatial home, hosting a dinner for people of prominence; at the conclusion, a lone caterer, “Chiara” (Barbara Lennie) locks eyes with Anabel; recognition is stunning; Anabel knows she is facing the daughter she abandoned thirty years ago when Chiara was eight-years-old; at her request, Anabel agrees to spend ten days with her estranged daughter, in her wooded, isolated home. What transpires is a feat of remarkable wonderment, the women gingerly explore their lives, accomplishments, silently, poignantly they resurrect the perpetual bond between mother and daughter, no longer cauterized,  their pain, sorrow bleeds into a transformative revelation, a request of, the only one, capable of granting it.

Painterly in its execution, every frame is a portrait, contrasting the generational differences: whiteness of Anabel’s glistening mane and Chiara’s unruly, dark tresses; anger, regret; a sleigh ride where invigoration and weariness, quietly soar.

“Sunday’s Illness” rummages into the souls of the protagonists, splays upon the viewer the tremendous, heartfelt will to erase time and powerfully restore, long ignored, trust and love.