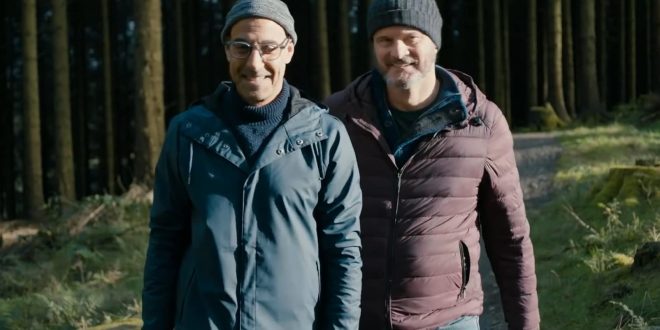 Supernovas are celestial, ephemeral stars, whose explosions, for moments, blaze center stage in a firmament, theatre, of unparalleled transcendence; oftentimes delegated to those who die, before their audience is requited: John F. Kennedy and his son John Jr., James Dean, Princess Diana, River Phoenix, Sylvia Plath, Amy Winehouse, Prince, Kobe Bryant. Director Harry Macqueen with actors Stanley Tucci (“Tusker”) and Colin Firth (“Sam”) gift radiance to a couple coping with the vilest devastation visited upon a loving, harmonious, long term partnership, Alzheimer’s. Tusker, a writer, with wry humor accepts his diminishment, until he cannot; Sam, a pianist, achingly, with sensitivity and palpable ardor, undertakes his role as caretaker; in a recreational vehicle they travel through English topography; visiting Sam’s family, recognizably their final excursion; their fate has been scripted.

Tucci and Firth, at the pinnacle of their theatrical mastery, imbue their characterizations, without sensationalism or guile, painting a portrait, a masterpiece of the human condition; profundity of loss searing the soul, and the chasm, the ultimate raw abyss, a beloved, leaves in his stead.