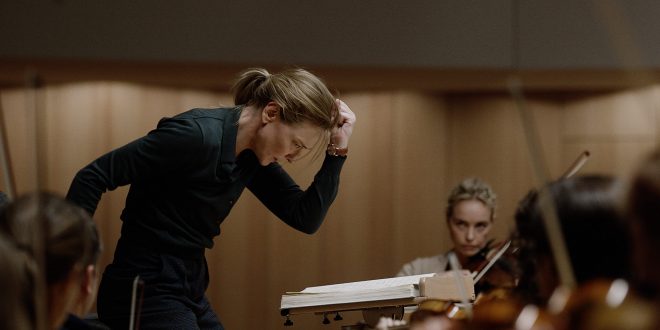 Cate Blanchett gives an indisputable, brilliant characterization of conductor “Lydia Tar”, a woman of magnitude, inimitable accomplishments, unfathomable that she could fall from grace; yet she does in writer/director Todd Field’s epic, Shakespearean, contemporary scenario. The first thirty minutes of the film are spellbinding; critic Adam Gopnik (playing himself) insouciantly reverent, interviews Tar, skimming past achievements, highlighting her newest book “Tar on Tar”; she with controlled style, subtlety, and distinctive intelligence, answers virtuously his immaculate questions; her interpretation of Mahler’s Fifth Symphony looms presciently in the future, assured of idiosyncratic success. She is a maestro of incalculable strength and power.

Isolated, imprisoned by her sculpted perfection, lacking empathy, her immunity to those easing her daily obligations: wife “Sharon” (Nina Hoss) and assistant “Francesca” (Noemie Merlant) fester with cruelty, unaware that the foundation of these relationships is sickeningly eroding.

Perpetually distracted from her own composition by extraneous sounds, incorporating banal noise but stymied by its intrusion, her refined, yet fragile, psyche unwinds; as rumors of sexual depravity (specters of Harvey Weinstein, R. Kelly, Jeffery Epstein), rear their ugly, abusive facades; she flounders in a limbo of denial, unnerved by the onslaught of maligning press and the decampment of world idolatry.

“Tar’s” intensity and exegesis demands viewers concentrated attention; more than a celebrated personage with colossal hubris; pulsating layers of present-day angst are implied but not defined. Rarely does a film require a second viewing, but Blanchett and Field assuredly, ultimately command it.