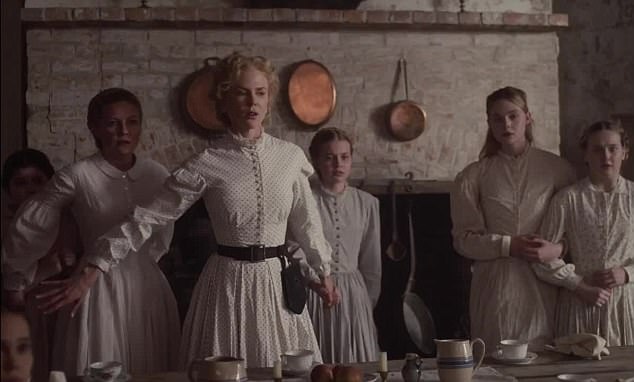 Over a lifetime of movie going I have left approximately five films; Sofia Coppola’s 2010 “Somewhere” was one of the few; shamefully I stayed for the entirety of “The Beguiled”, a film so flavorless, dimensionless and hypnotically dull that disbelief outweighed enervation; why did this film not cease to be before dumping it on the unsuspecting public?

The monotony commences in Virginia, 1864; a mercenary, wounded Union soldier, “Corporal John McBurney” (Colin Farrell) is nursed back to health by seven testosterone deprived women, housed in withered glory in a woman’s boarding school; run by matron “Martha” (insipid portrayal by Nicole Kidman) and her second in command “Edwina” (bland Kirsten Dunst, a favorite of Coppola’s); their days comprised of French lessons, sewing and mushroom picking. A “beguiling” masculine presence (Farrell does what he can with a limited script) sets the stage for female competition over the hapless soldier; dressing for dinner scenes, giggling, sophomoric flirting led to viewers laughing incredulously.

Predictability ensues and an “unbeguiled” audience exit, knowing with certainty, that they had been royally de-bunked.