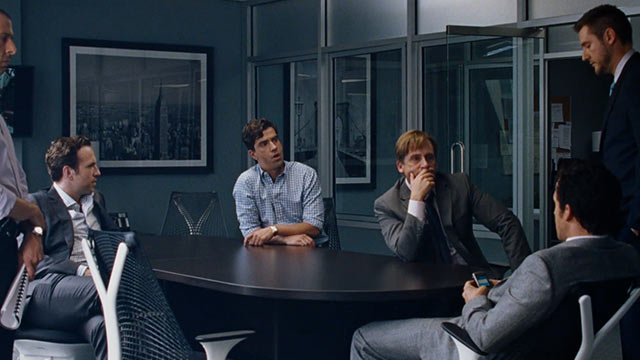 The concept of “selling short”, betting that a stock, bond, etc. will head south, lose its value seems un-American, pessimistic; I do not purchase “trip insurance” for the same reason; prefer a “bloom” not “doom” mentality. But “The Big Short” directed by Adam McKay, based on the best-seller “The Big Short: Inside the Doomsday Machine” by Michael Lewis tackles the 2008 housing market’s combustible demise with compelling insight into the prescient principals who created one of the largest negative bets in market history.

Steve Carrel’s performance as money manager “Mark Baum” (Steve Eisman, FrontPoint Partners, unit of Morgan Stanley) anchors the film; fascinating to watch as his illusions are decimated by facts; he travels with his partners to Florida and sees the massive abuse by lenders, real estate agents, and not to be excluded, naive, disillusioned buyers; erroneously, all convinced that housing values would continue to rise. Baum is the conscience,  the moral fiber holding the narrative together.

McKay’s stroke of innovative genius was assigning recognizable notables as instructors in the complexities of: Mortgage Backed Securities (MSB), a delectable, champagne-drinking Margot Robbie in a pneumatic bubble bath; Chef Anthony Bourdain, comparing CDO’s  to a fish stew; Selena Gomez and Richard Thaler (behavioral economist) using blackjack as a metaphor for a synthetic CDO; closest I have come to understanding derivatives.

“The Big Short” is massively ambitious, falling “short” in addressing accountability: Government, FBI, Banks, individuals lapping up “pie in the sky” scenarios; but it fissures the complexities behind Wall Street organizations and the mentality that forges their decisions.

2015-12-12
Peneflix Admin
Share !
Previous: THE DANISH GIRL
Next: MOVIES (SOME PREVIOUSLY REVIEWED) THAT SHOULD NOT BE MISSED!!!!