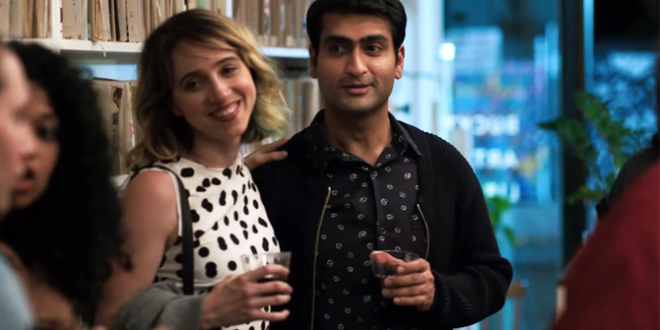 There is a pivotal scene in this autobiographical film that resonated with profound honesty; a confrontation between a contemporary American Muslim and his traditional parents; redolent with truth, pain; a chasm of misunderstanding exists between the generations, intransigence thrives on both sides. Anyone who has ever loved “outside the box” will relate to its relevance.

Of particular charm is that “The Big Sick” was written by Kumail Nanjiani and Emily Gordon; it is their story and worthy of the screen; of major interest and admiration is that Kumail plays himself, a self-deprecating stand-up comedian, who falls in love with graduate student Emily (enchanting Zoe Kazan) and per usual “the course of true love never does run smooth”; after revelatory facts bifurcate the couple, Emily becomes gravely ill and the film soars with the introduction of her parents, Beth and Terry (superb performances by Holly Hunter and Ray Romano); Kamil’s mother and father, Sharmeen and Azmat (Bollywood devotees will recognize Zenobia Shroff and Anupan Kher), of Pakistani heritage, entrenched in centuries old tradition, devoid of flexibility, are stratospherically devastated by Kamil’s choice.

It is rare and refreshing when a film, without being pejorative, gifts viewers a moral, a vision of righteousness; a supreme, infallible being would never deem a marriage between loving individuals anathema because of religious disparity. Here’s to those who despite the odds, follow their hearts, blend their cultures, enhancing both in the process.