Latest Reviews
Home » Hollywood » THE BIRTH OF A NATION 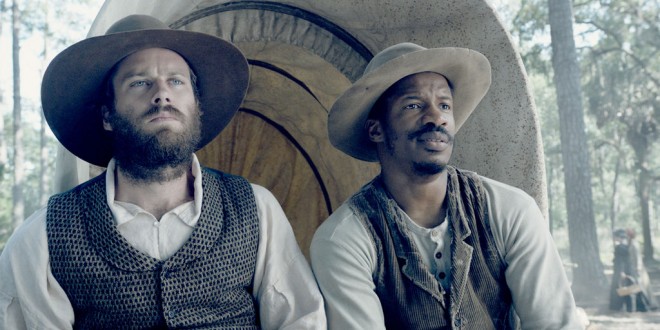 THE BIRTH OF A NATION

This is a movie, and should be judged solely on its merits, not the controversy revolving around Nate Parker’s off screen vicissitudes, nor D. W. Griffith’s (1875-1948) 1915’s “Birth of a Nation”, or even William Styron’s 1967 Pulitzer-Prize winning “The Confessions of Nat Turner”.  “The Birth of a Nation” is a movie, a movie worth seeing, contemplating and in conclusion truly admiring.

Nate Parker wrote, directed and stars as the beleaguered, prophetic preacher, Nat Turner, who led a catastrophic slave uprising in 1831; Parker’s performance ranks as one of the finest of the year; brilliant transitions, from his gifted oratory skills, where he infuses fellow slaves with a concerned, caring “master” beyond the confines of their subjugated existence, to extreme retaliation for overwhelming injustices. Parker makes his point with inimitable skill, refinement and eloquence.

A supporting cast, equally match Parker’s depiction: Armie Hammer, as benign, perpetually-pickled owner “Samuel Turner”, stuns as a partially sensitive man who treats his slaves with a modicum of respect, like a precious pet, but beaten when misbehaved; Penelope Ann Miller, Sam’s mother, “Elizabeth Miller” recognizes Nat’s innate intelligence as a young lad and teaches him the rudiments of the Bible, but is incapable of granting him the “freedom” to enhance his acuity; Aja Naomi King is superb as Nat’s wife, “Cherry”, a house slave, horrifically abused, a powerful catalyst in Nat’s transformation.

Where “The Birth of a Nation” excels, not just in directing, acting and cinematography, in its educational value; slavery is indigenous to our history and like the Holocaust, must be remembered, and its bleakest moments should never be veiled or obfuscated, but confronted, studied, and its lessons incorporated in how we live our lives.

In conclusion, is it flawed, pejorative, sensational? Yes. But in my estimation it is “poetic license” and Nate Parker should be lauded for his.