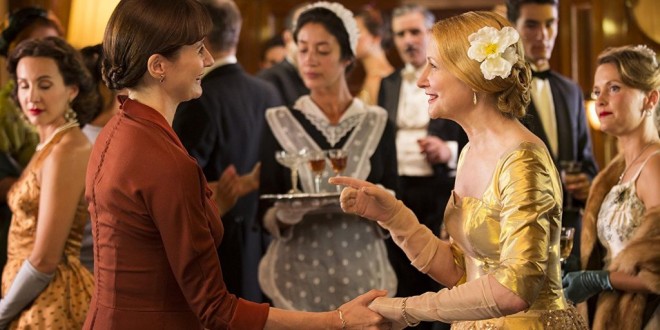 Penelope Fitzgerald’s (1916-2000) 1978 novel can be described simply as a portrait of courage. Since the passing of Senator John McCain on August 25th, we have heard the word countless times but no one owned, soared higher in the courageous category than Meghan McCain in her eulogy for her father; as rare as the man, was the depth of sensitivity, voluminous insight, incalculable devotion, brilliantly poured forth from her broken heart, but enlivened intellect. As long as I’ve lived or will live, doubtfully will I be touched again by the profundity, wealth, scope of her praise, analogy of a man who, not only earned his badge of courage but gifted it to his daughter. “Florence Green” (Emily Mortimer, sweeping, divine depiction) a widow in a small English town, after many years, steps beyond her grief and opens a “bookshop”; recognizing the curative power of the written word, an aphrodisiac for the mind, denying depression, loneliness. Her expanded world is encouraged and threatened by her fellow townsmen: “Edmund Brundish” (Bill Nighy, commands and conquers the emotional landscape, wordlessly, plaintively, gracefully, without equal), his chosen isolation, willingly shattered by her choice of recommended literature (Nabokov’s “Lolita” and Bradbury’s “Fahrenheit 451”); “Violet Gamart”, the town’s perfectly perfidious, poisonous grande dame (deliciously deceitful, gilded performance by Patricia Clarkson) plans to sabotage the bookshop for her own aggrandizement, aided by salaciously slimy “Milo” (queasy, cunning James Lance). Told in retrospect by an adult “Christine” through the eyes of her thirteen-year-old self (Honor Kneafsey is enchanting as saucy, bright and loyal “assistant”). Florence and Christine anchor the author’s intent; one generation’s powerful influence on another; flavored autobiographical inferences filtered through a tale of parochial politics, starting afresh in mid-life; valor to fend off ignorant, petty adversaries, stalwart resolve, despite untoward consequences. Courage breeds illumination, elucidation, integrity.