Latest Reviews
Home » Hollywood » THE BOY WHO HARNESSED THE WIND: NETFLIX & IN THEATRES 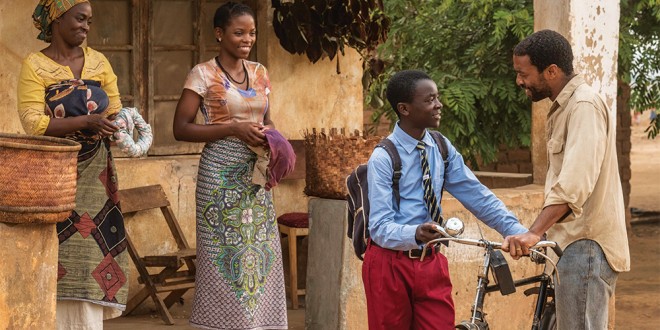 The Boy Who Harnessed the Wind

THE BOY WHO HARNESSED THE WIND: NETFLIX & IN THEATRES

Despite the ongoing conflict revolving around television’s Netflix versus the “Big Screen”, there is no doubt that the positive, unequivocally champions the negative; “The Boy Who Harnessed the Wind”, a stellar story, pulsating with vitality and heart, should be required viewing for all ages; directed by, and starring Chiwetel Ejiofor, it throbs with genuine, unfeigned sincerity, pungently powerful emotional content and riveting intelligence.

Landlocked Southeastern Africa (Malawi): villagers eke out a living by farming crops, predetermined by the fickleness of nature; droughts and monsoons, dearth or plenty, whimsically defined; government deceit adds to their travails. Trywell Kamkwamba (Ejiofor) tills the soil, struggling to provide minimal sustenance for his wife and three children; his son William (sensational, Maxwell Simba), innately inquisitive, thirsts for knowledge, but for lack of funds, is banned from school; ingenuity prevails and he maneuvers library privileges where he recognizes the partnership of wind and electricity could stymie nature’s mercurial temperament.

There is so much to cheer, admire and love about this film; elation, success won through stalwart, unwavering determination; purest metaphor for never sacrificing, shunning one’s intuitiveness; “The Boy Who Harnessed the Wind” soars with a velocity of hope, encouragement, triumph and can be experienced by families in domiciles worldwide, due to the prescience of “Netflix”.