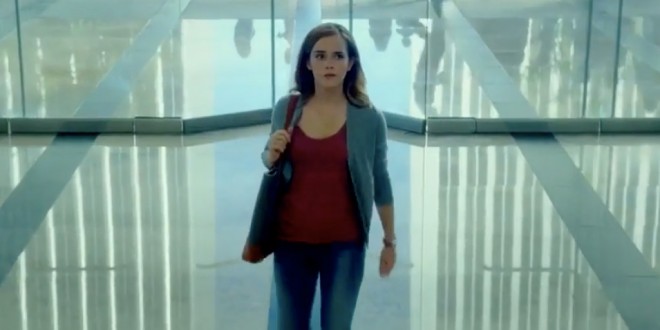 George Orwell’s “1984” was published in 1949; eerily disturbing, futuristic portrait of a world where privacy was banned; lives were watched and controlled by “Big Brother”; rules broken led to annihilation. Director James Ponsoldt’s “The Circle” (based on Dave Eggers 2014 novel) is a more benign, palliative world but just as invasive and lethal.  Tom Hanks as “Circle” Founder, “Eamon Bailey” oozes insouciant charm; glibly, with Zuckerberg/Job-like magnetism, is spellbinding as he serves the Kool-Aid to new recruits, “guppies”; “Mae Holland” (stellar performance by Emma Watson) is insatiable, and through a mishap that saved her life, becomes the poster girl for total transparency; globally, her every waking/sleeping second (3 minute bathroom breaks) can be voyeuristically viewed by all circle members. The Circle’s omnipresent encompassing “eye” is planted unobtrusively throughout all viable cities, communities resonating with Bailey’s philosophy of “knowing everything is better.”

Blatant encroachment inspires one disaster after another; there is no place to hide, no invisibility; superior tracking devices discover the whereabouts of the nefarious and the innocent; a filter-less world, devoid of empathy for an individual’s right to privacy, solitude, in actuality the elimination of free will.

2017-04-30
Peneflix Admin
Share !
Previous: THE LOST CITY OF Z
Next: THINGS TO COME; FRENCH (ENGLISH SUBTITLES) (ON DEMAND) & IN THEATRES