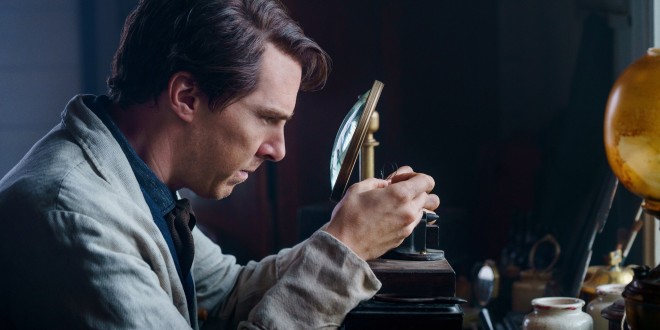 Earlier this year I attended a lecture concentrating on the contributions, competitions, inventions of: Thomas Alva Edison (1847-1931), George Westinghouse (1846-1941), Nikola Tesla (1856-1943); the professor’s initial question was “who was the greater genius?”; the vast majority of upraised hands were for “Tesla”; over two hours of fascinating edification left me longing for the film, directed by Alfonso Gomez-Rejon (“American Horror Story”), starring Benedict Cumberbatch (Edison), Michael Shannon (Westinghouse), Nicholas Hoult (Tesla); unfortunately “The Current War” lacks spark, regardless of AC (alternating) or DC (direct) currents. Petulance, duplicity, foppery, informs these anemic characterizations of men who revamped the universe and eliminated darkness; Edison, inventor of the DC around 1887 while Tesla pioneered the AC at approximately the same time; Westinghouse (inventor of the railway air brake) along with Tesla bests Edison in winning the commission to illuminate Chicago’s Colombia Exposition in 1893.

There is a hollowness, a vacantness, lack of mettle informing the interaction between the protagonists; instead of illustrating their far-reaching prodigious inventions, the focus is on their flaws, pettiness, personal lives (in reality, their families were inconsequential, a distant second to their imaginative acuity); a huge portion of the film revolves around the invention of the electric chair (never addressed in the lecture) and Edison’s skullduggery in avoiding authorship, contributing it to Westinghouse; ironically both men escaped ownership of the idea, Alfred P. Southwick (1826-1898) holds the dubious honor; but the Edison Works at West Orange, New Jersey is recognized as the manufacturer of the first “chair” execution.

These fecund visionaries, with immaculate clairvoyance and ingenuity paved the road to modernity: Edison garnished over one thousand patents; Westinghouse and Tesla, each achieved three hundred; their “genius” undisputed; as individuals, sorely bereft.

“The Current War”, short-circuited, leaving all placidly neutral; a pyrrhic outcome for a movie that should have been electrifying.