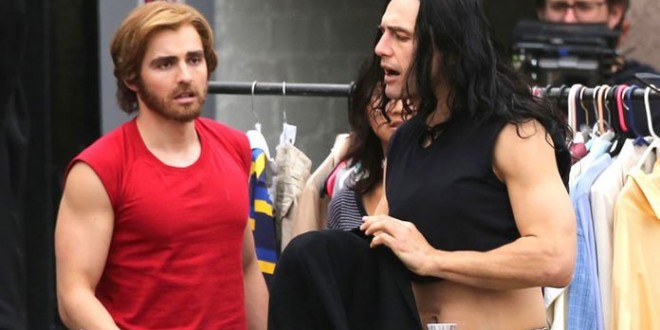 It is a masterful, prodigious auteur who can produce a terrific film from one of the most disastrous movies ever realized. James Franco has accomplished, with verve, imagination and inimitable style, the magical. Mimicking the enigmatic Tommy Wiseau who wrote, directed, produced and starred in 2003’s catastrophic dud “The Room”; Franco’s interpretation, flawless indefinable accent, is gifted; Tommy, goth-like, dyed black tresses and suits; isolated, a mysterious man taking acting classes in San Francisco where he meets Greg Sestero (perfect pairing with Dave Franco, James’s younger brother) and the two bond over a zealous devotion to James Dean; they flee to Los Angeles where Hollywood’s Sirens lure with the promise of stardom and gleaming glory. When shunned by the establishment Tommy decides to stun the world with his own, seemingly autobiographical tale; he is iron-fisted, intolerant, belligerent with his crew and cast; their paychecks always clear.

There’s a sadness, a desperation in his attachment to Greg, edgy androgyny infuses their interactions; hurt by Greg’s affection for Amber (Alison Brie), nevertheless, his devotion never wavers; goodness, love and the purity, poignancy of friendship lie at the heart of “The Disaster Artist”. Franco, with boundless depth, electrifies with his performance; courageous in his attempt, tenacious in its execution; erasing Tommy’s anonymity, allowing him to rise and stand comfortably on a pedestal manufactured by his own ingenuity.