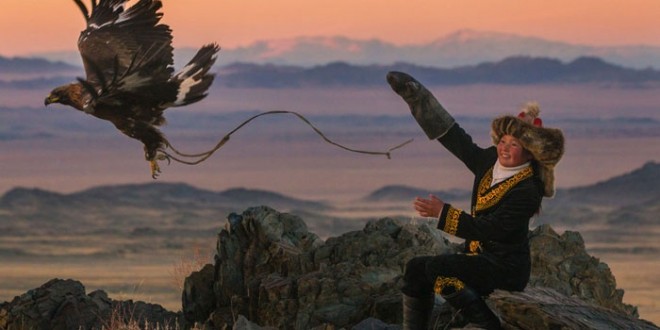 Exodus 21:2. If you buy a Hebrew slave, he is to serve you six years; in the seventh year he is to go free, without paying anything. In Kazakh tradition you free your faithful eagle, after seven years of devotion, so the rest of their existence is at their own whim.

Director Otto Bell, Cinematographer Simon Niblett and Sia’s song “Angel by the Wings” captivate audiences as they follow the dream of a thirteen-year-old Kazakh girl, Aisholpan, in her quest to be the first female eagle huntress after twelve generations of male monopolization.  Amazement, wonder dominate every sequence. As Aisholpan, mentored by her father Nurgaiv, a twenty-first-century man, living in midst of the Mongolian steppe and Altai Mountains, accepts his daughter’s right to master her innate gift; their bond of respect and love infuse greatness into this remarkable documentary.

The diligence and strength required to master this skill is overwhelming: Aisholpan must capture her own eagle, train to hunt (the eagle is the major source of food and clothing for the Kazakh populace); she must be an accomplished equestrian, riding with fervor, carrying her fifteen-pound eagle. She is thrilling to watch, uninhibited by stunned stares; her infectious smile accompanies each triumph.

“The Eagle Huntress” is key in disowning preconceived formulas, niches where one is ostracized because of one’s gender, religion etc. It is an astounding lesson from a primal part of the globe; a world uncluttered by consumer minutia; stripped of the inconsequential, enlightenment, magic swells as the “power of one” emerges and soars.