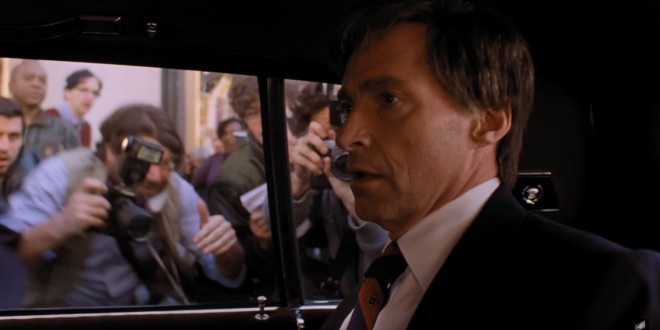 Director Jason Reitman and actor Hugh Jackman ambitiously recreate the meteoric rise and precipitous fall of Senator Gary Hart, the “Front Runner” for the Democratic nomination for President; it is 1987 and Harts’ downfall led to the massive disparity, that is is egregiously exacerbated in today’s world, between the press and politicians (CNN’s reporter Jim Acosta’s White House press pass was revoked and then restored); in the past, there were areas of confidentiality, in a politician’s life, that were considered sacrosanct by the news media; in essence, rules, unjustifiable behavior were reserved for the masses, powerful personages were exempt and demanded roadblocks between their public and personal lives; this exclusivity has been bulldozed, pulverized in the last thirty years.

“The Front Runner’s” ambition was thwarted by the redundancy of the theme; despite worthy depictions by Hugh Jackman as the disgraced Hart, Vera Farmiga (Lee Hart), J.K. Simmons (campaign manager), Manoudou Athie (A.J. Parker, Washington Post reporter, who questioned Hart about his marriage and morality), Steve Zissis (Tom Fiedler, Miami Harold reporter, who discovered Hart with Donna Rice); Sara Paxon is captivating as Hart’s femme fatale,”weapon of mass destruction”, Phi Beta Kappa, Donna Rice; same old story, where man’s liability for actions perpetrated below the belt, are excused; in one scene Hart takes umbrage that a reporter would question his integrity and extracurricular activities, asserting the reporter’s lack of gentility.

Gary Hart was a visionary, capturing the youth of America with his altruistic goals, but ultimately “it is easier to fight for one’s principles than to live up to them.”