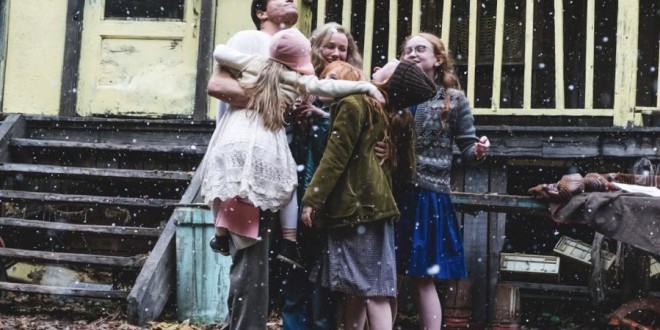 For those who have read the book there is a bludgeoning redundancy throughout the film; pivotally performed by actors Brie Larson, Woody Harrelson, Naomi Watts, Ella Anderson; frustration stroked by horrific circumstances; four children, if not physically abused were emotionally castrated by an inebriate of “air, whimsy and alcohol”; Harrelson plays Rex Walls,  the architect of the fantastical Glass Castle, Jeanette’s charming, dysfunctional, intelligent father; his delusions and charismatic capabilities are a pathetic substitute for a normal childhood and education; Harrelson’s gifts “Rex” with messianic properties, spewing his “rexisms” with gusto, legitimizing an aberrational, adulterated lifestyle. Naomi Watts, flimsily depicts Jeanette’s mother, Rose Mary, as a naïve “outside” artist, her simple, elegant portraits of nature are an avoidance of a feral life, anchored by destitution, poverty and non-accountability.

Ella Anderson, as ingénue Jeanette is spellbinding;  depicting a young girl desperately longing to please, believe and love her juvenile father; their scenes together are redolent with warmth, hope and magnetism; Ella is a star whose ascension will be glorious to observe.

Academy Award winner Brie Larson, personifies Jeanette, first as a teenager whose illusions are slayed on the altar of her father’s drunkenness, cruelness and amorality; her wretchedness is palatable, her escape, well-planned and inevitably executed; secondly, as an adult who has achieved autonomy, success in spite of her father’s obnoxious ploys to keep her cemented, engrained in his jejune philosophy; secondly, as the immaculately coiffured, couture-encased woman of substance; she is a gossip columnist, engaged to a capitalist, hiding her heritage behind augmented fictions. An invented persona, dismissive of the roots of her discontent; eventually confronting the profound complexities that have defined her existence.

Director,  Destin Daniel Cretton remains true to Wall’s scenario but it unfolds with a placidity hardly worthy of of the trauma.  2016’s “Captain Fantastic” depicts enigmatically, realistically and substantially more satisfying,  a family coming to terms with living outside the grid.