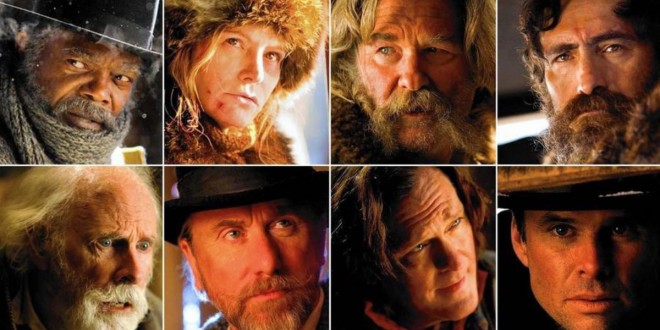 THE HATEFUL EIGHT: 70 MM, THE 8TH FILM BY QUENTIN TARANTINO

Quentin Tarantino never fails to titillate, traumatize and massively entertain; probing the depths of his horrifically fantastic, fertile imagination he gifts audiences his best yet; a MUST in 70mm, (a rarity in the film world: “Ben Hur”, “Mutiny on the Bounty”, “It’s a Mad, Mad, Mad, Mad World”, “Battle of the Bulge”, “Khartoum”) worth every dime of the extra fee, “The Hateful Eight” ambushes one’s attention and holds it captive for three hours and seven minutes, intermission included. Ultra Panavision 70 eliminates the barrier between the action and the viewer; hypnotically unnerving, passionately provocative.

Most of Tarantino’s films resonate with tones of medieval morality plays; protagonists representing the deadly sins and a perpetual tug-of-war between the evil they symbolize and the supreme divinity; the film commences in the magnificently beautiful but frightfully menacing terrain of Wilson Mesa in the Colorado Rockies (Telluride); the stagecoach passes a snow-clad, half submerged crucifix, a portent of the excruciating saga, soon to evolve.

Brilliantly executed, masterfully scored by composer Ennio Morricone, Tarantino grasps the heightened emotions, tensions simmering, hibernating after the Civil War; vigilante justice, gun-carrying, savage men and women who had survived the war meted their own punitive morality; there was an attitude of fairness, acceptance in their rule- less reality.

The most remarkable scene, before “intermission” was between Major Warren (Jackson) and General Smithers (Dern) is a redolent metaphor for the abysmal crime of slavery and the toll it visited upon our nation. Quentin Tarantino’s “The Hateful Eight” will pungently cling with its historical insights, values and retribution; a contemplative, brutal tale, signifying volumes.