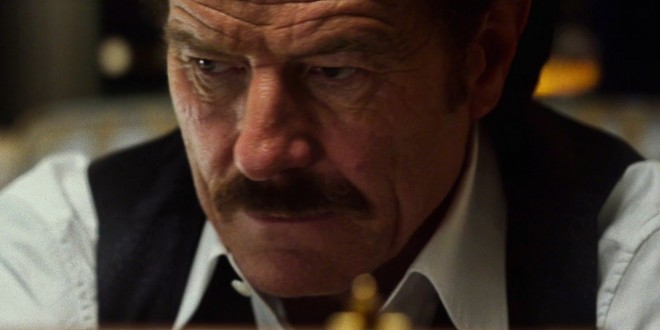 Bryan Cranston gives a blistering performance as Robert Mazur, a U.S. customs agent, impersonating a money launderer in the 1980’s; Columbia’s drug cartel led by Pablo Escobar is the target of Mazur’s mission (based on Mazur’s book featuring the “sting”); Cranston’s titillating intensity captures the galvanizing strength demanded for the success of Mazur’s ruse; his partner Emin, played with insouciant charm and mettle by John Leguizamo, is a perfect concoction of chutzpah, bravado and foxlike cunning.  It is a partnership that is based on monumental trust and anchors the legitimacy of the scenario.

To “infiltrate” the illegitimate elite of the cartel “Bob Musella” (Cranston) must have a female agent as his fiancé , “Kathy” (portrayed with luscious ingratiation by Diane Kruger); her astuteness, confidence is imbued with above board professionalism and grace. Olympia Dukakis as Aunt Vicky, a feisty businesswoman, is instrumental in the pivotal meeting between “Musella” and Roberto Alcaino, a frontman for the malevolent hierarchy;  Benjamin Bratt, lethally handsome, is stunning, believable, even likeable as one of the iniquitous kingpins.