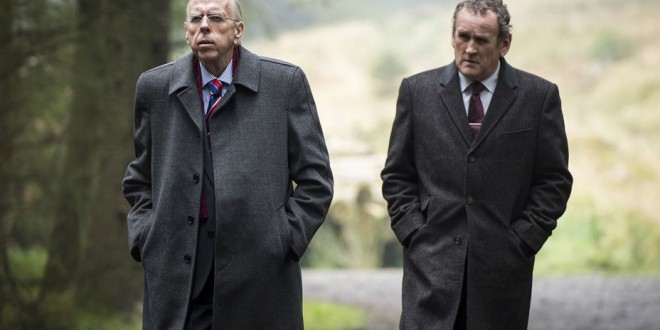 Focuses on the 2006 St. Andrews Agreement, a monumental step in the elimination of the bloody strife between The Democratic Unionist Party and the I. R. A./Sinn Fein; Ian Paisley(Timothy Spall) and Martin McGuinness (Colm Meaney) and the fictionalized, imagined version of how these mortal foes became “The Chuckle Brothers” eventually serving as First Minister and Deputy Minister of Northern Ireland.

Director Nick Hamm and writer Colin Bateman have fantasized a car journey where the Reverend (Paisley) and the ex- Sinn Fein warrior (McGuinness) are cocooned; prejudices are revealed, wrongs chastised; histories of crimes, loss of dignity informs both men; petulance, animosity slowly erodes as rationality and a peaceful future transcends their mutual wrath.

The success of the film lies in the formidable performances by Meaney and Spall; intelligent sparing, one-upmanship reigns as each man takes his turn in the “ring”; challenging viewers to pick a winner; ultimately resulting in a draw; a draw that changed the political landscape of Northern Ireland to this day.

“The Journey” takes license in its interpretation of the facts, manipulating conversations that may or may not have occurred. There is no disputing the accord or the unlikely friendship that cemented these men for the remainder of their lives.