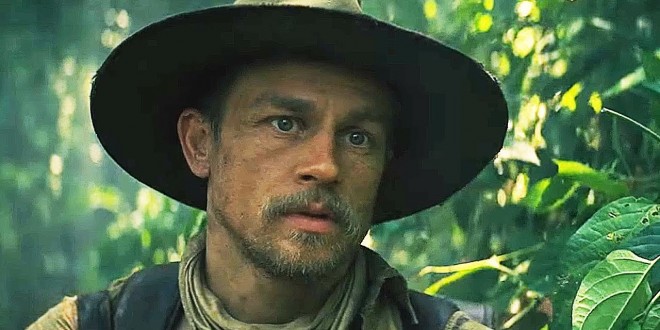 THE LOST CITY OF Z

The prize for territorial inquisitiveness is championed by the British, it is imbedded in their DNA: Sir Frances Drake, 1540-1597 (circumnavigated the globe); Sir Walter Raleigh, 1552-1618 (the New World, Virginia); James Cooke, 1728-1779 (New Zealand); David Livingston, 1813-1872 (Africa); Percy Harrison Fawcett, 1867-1925 (South America) and the focus of the spectacular “The Lost City of Z”. Writer/director James Gray delves into the enigmatic explorer, Lieutenant Colonel Percy Fawcett, and the compelling call of Amazonia; Fawcett’s, a cartographer,  fascination began in 1906 when he was sent by the Royal Geographical Society to map the borders between Bolivia and Brazil; thus began the perpetual lure of a lost city of gold smothered somewhere in the Amazonian jungle. Gray’s adaptation of David Grann’s 2009 account of Fawcett’s journeys and baffling disappearance keenly, without the sensationalism of “Indiana Jones”, portray the man superseding the terrain; despite the perils,  Fawcett and his crew transcend the piranhas, sickness, cauldron- like heat.

Charlie Hunnam with stark, haunting dignity gifts the mighty Fawcett, stalwart resolve; his leadership and protectiveness triumph daunting odds. Fawcett’s only degree of malleability occurs in his dealings with his feisty wife “Cheeky”, Sienna Miller gives a dazzling, refined performance as a woman who recognizes her husband’s ambition and accepts its turpitudes. With his three children he exhibits a remoteness, absent for years at a time, they are an unknown commodity; his oldest son Jack eventually succumbs to his father’s lust for the untamed, untrammeled jungle.

Percy Fawcett was a mysterious, principled man, not easily diagnosed; a follower of Helena Blavatsky, (1831-91) ” Theosophical Occult”; possibly the rigidness of late nineteenth, early twentieth century sowed seeds of discontent, a yearning for an unharnessed, unharassed society. There is a fecundity of glory in the beautifully filmed, lushly defined jungle; but its pulse lies in the depth of the mysterious Fawcett, we are left, only to surmise its source.

2017-04-28
Peneflix Admin
Share !
Previous: NORMAN: THE MODERATE RISE AND TRAGIC FALL OF A NEW YORK FIXER
Next: THE CIRCLE