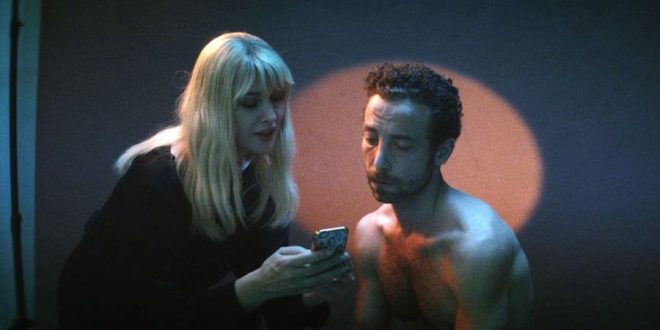 Artists are perpetually striving to portray the innovative within their own discipline: paint, marble, bronze have been substituted, traded for contemporary mediums: digitalization, interactive technology ignites unprecedented techniques; parameters of “what is art” are swelling; “The Man Who Sold His Skin” with remarkable depth focuses on Syrian refugee “Sam Ali” (spunky Yahya Mahayni) escaping to Beirut and selling his back to tattoo artist “Jeffrrey Godefroi” (Koen De Bouw); his love for married “Abeer” (Dea Liane) drives his commitment to the project;  it is not nascent for artists to use their bodies as canvases: Carolee Schneemann, Chadwich Gray, Gina Pane, Wim Delvoye (Belgian artist whose work inspired the film); it is Sam’s paperless status, screaming of exploitation and a esurient, manipulative art market that writer/director Kaouther Ben Hania’s framework revolves around; resonating with shades of 2017’s brilliant “The Square”, a satirical interpretation of an elitist curator and the sycophancy of his doners. Sam with his back to the viewer is a breathing, branded sculptural exhibit.

“The Man Who Sold His Skin” stylistically filmed; Sam, beautifully garbed as he strolls through museum galleries, cloaked with archival masterpieces, recognizing his stature in relationship to the masters; his value increases, as his humanity decreases, resulting in a powerful Auction episode, reverberating with the horrors of the slave trade.  Protean in scope “The Man Who Sold His Skin” rambunctiously hops from didacticism, consumerism, totalitarianism, romanticism, and in the process is haphazardly daft, unconventionally hilarious and stratospherically phenomenal.