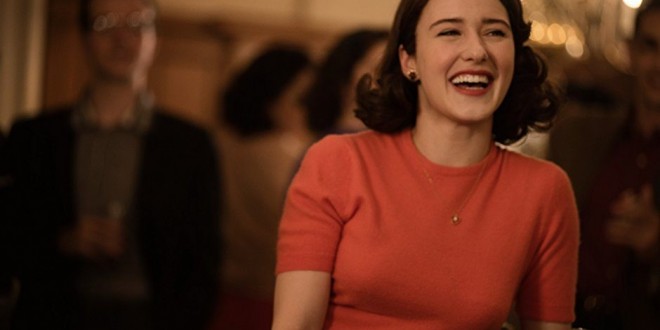 There is not a doubt that “Marian “Midge”Maisel” (irreverently dazzling, Rachel Brosnahan) is adorably “marvelous”; I had avoided meeting her, until a week ago, and now after 18 episodes, we have irrevocably bonded, puzzling as to why? I respect the skill but have never been a devotee of “stand-up” comedians; usually left with an uncomfortable, cringing embarrassment for the performer, and like golf, no matter how masterful, they occasionally bomb.

Set in the late 1950’s Marian is unmatched as a homemaker, mother of two, immensely supportive of her husband “Joel” (eventually empathetic Michael Zegan) and his dream of becoming a stand-up comedian; she is beautiful, smart, wealthy, Jewish and iconoclastically hilarious (a genetic composition shared by many of her nation). What hooked me is that she bulldozes a male dominated profession, looking as “Vogue” as a runway model; Brosnahan is gifted with impeccable timing and stuns in writer Amy Sherman-Palladino’s depiction of discovery, self-assuredness, mind-blinding ambition. Joan Rivers was a possible inspiration for the role.

More than “Midge” it is her agent “Susie” (staggeringly talented Alex Borstein) who plunders one’s sense of humor; soundlessly, her expressive face speaks volumes; uproariously funny, dishing out salacious, lewd comments, insults, no one, nothing, is sacred from her merciless barbs; brilliant writing fuels her deliciously wicked taunts.

“The Marvelous Mrs. Maisel” is flamboyantly stylish, slick shtick heralds archival Jewish folklore, traditions, customs and remarkably, you no longer “have to be Jewish” to get it; the test of success is accessibility, and Mrs.Maisel encompasses all audiences regardless of their ethnicity, demographics. This is a series of tantalizing, titillating wonderment; a monopoly on uniqueness, guaranteed to excavate a long dormant “funny bone”; it is joyful, tempestuous, good (maybe not so clean) fun; wildly anticipating a third, high-flying, rollicking season with the “dervishly”, enchanting Mrs. Maisel.