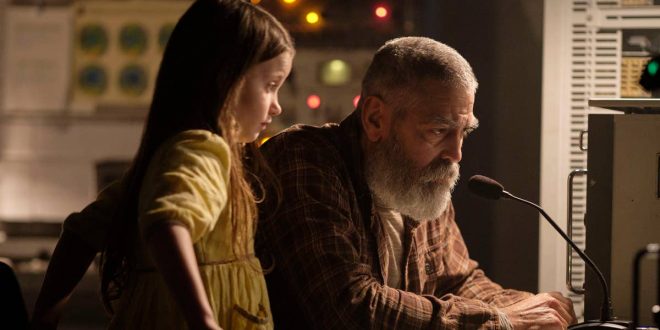 I have an innate prejudice when it comes to dystopian, apocalyptic films; acknowledging their technological wizardry, the aftermath leaves me in a queasy, dissatisfied, jetlagged fug: “The Road”, “Total Recall”, “Mad Max”, “Oblivion”, “Children of Men” and in particular “The Lobster”, were so systemically oppressive, depressive; no matter the ills of the twenty-first century, it is a “far better world” than these futurist prognoses; with this bias, I submerged myself in George Clooney’s “Midnight Sky”; it is 2049 and havoc has been visited upon earth and “space” does not mimic “the friendly skies”; it is celestially awesome; notably acted and directed by Clooney(“Augustine”, a scientist with terminal cancer, living his final moments in the Artic); Felicity Jones, with her usual insight and intelligence depicts “Sully” a space cadet on the spaceship“Aether”, expecting a child with fellow astronaut “Gordon” (minor, constricted role by David Oyelowo); most commanding and compelling is “Iris” (Caoilinn Springall) a child left behind in Augustine’s man cave; silently calculating and beautiful she is muse- like in her treatment of her attentive host.

“The Midnight Sky” at times plodding, begging comparisons with “Gravity” (a far better viewing), totally bereft of the empathetic potency of my champion of all apocalyptical films,  “WALL-E” a lonely robot, looking for love;  WALL-E, his robotism touches a wellspring of emotions, rarely elicited by the daunting, prodigious protagonists of human proportions.

Applauding Clooney on his ambitious, energetic direction and performance; dolefully, the movie lacked the gratification factor.