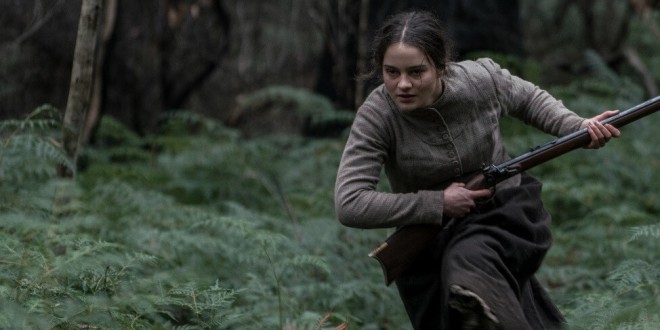 Australia’s Jennifer Kent exceeds brutal boundaries in her latest petrifying revenge movie; those of a squeamish nature will be tested in the initial scenes; set in 1825 Tasmania, a British colony off the southeast corner of Australia; Kent owns the film as its writer, director and producer, and is fearless in her representation of genocide, colonial abuse and sexual sadism. Infused with an outstanding cast “The Nightingale” is a resounding testament to a director’s fecund imagination; scintillatingly realistic depiction of a woman determined to avenge an egregious, barbarous example of “man’s inhumanity to man.”

“Clare” (beautiful, profound performance by Aisling Franciosi) stalks British officer “Hawkins” (unscrupulously consummate depiction by Sam Claflin) a Tasmanian devil whose moral degeneracy wallows, rejoices in depravity. Clare is aided in her quest by tracker, “Billy” (prime reason to visit this film, Baykali Ganambarr), a “black” who if seen or caught could be assassinated without impunity; their relationship morphs from contempt to respect, grudging love.

“The Nightingale” references Clare’s pure, refined voice and the poignancy of the lyrics; Billy also chants his native musical phrases, redolent with chirping, boundless blackbirds; in tandem their symphony spirals above man’s limitations, embraces the celestial, and soars.

2019-08-17
Peneflix Admin
Share !
Previous: THE LOUDEST VOICE (SHOWTIME)
Next: BLINDED BY THE LIGHT