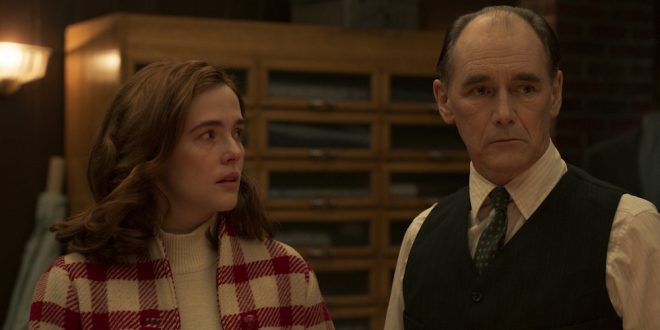 THE OUTFIT (IN THEATRES)

Filmic whiplash has never been more exhilarating, intoxicating; once you feel surefooted, writer/director Graham Moore (“The Imitation Game”) has you spinning out of control, flying out of your seat, knowing you are experiencing the best film of 2022; viewers are incarcerated, on a snowy evening in 1956, Chicago; a tailor’s shop whose proprietor, an expat from London’s Saville Row, “Leonard” (Mark Rylance’s superiority is outstanding) caters to the gangster gang: “Richie” (Dylan O’Brien, spoiled brat perfection) a simpering son of the “Boss” “Roy” (never better, Simon Russell Beale), “Francos” (Johnny Flynn, preeminently obnoxious) a wannabe Kingpin;  receptionist “Mable” (Zoey Deutch, subtlety multi-faceted) has an aura of ambition along with a lack of respect for Lenoard, who refers to himself as a “cutter” not a tailor.

The shop is a drop off for the nefarious and their clandestine shenanigans.

The title itself in a double entendre, referring simultaneously to mobster mayhem and fashion. Moore, a Chicagoan, aware of historical home-grown mobsters: Al Capone, Frank Nitti, Bugs Moran, and their flair for suavity; fine frocks masking evil intentions; the Cutter is a master with his potent scissors; Leonard, a fascinating enigma, left London after the war and because of the invention of ubiquitous “jeans” (cannot quarrel with his logic).

“The Outfit” is pungently violent, thrillingly unpredictable, surprisingly complex, scandalously titillating, intentionally obfuscating; Moore stated the film was all that he wanted it to be, and I am in complete concurrence.