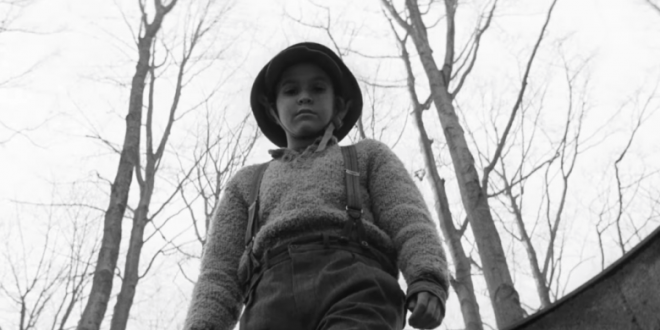 Jerzy Kosinski’s 1965 novel of the same name, translates into a horrific, bestial, brilliant visual experience; not for the squeamish or feint sensitivities; there are scenes seared permanently in my memory; moral turpitude on an unimaginable scale; cruelty practiced by a religious populace. Crimes perpetrated upon a young boy seeking safety, sanity in Eastern Europe, during WWII.

He is Jewish, sent to a withered aunt, in an unnamed rural area; meeting him as he runs with his pet rabbit, chased by barbaric boys who beat him and incinerate the rabbit; the boy (a resourceful performance by Petr Koltar) with his aunt’s death must navigate a bleak, Stygian world, bereft of kindness, decency; infused with ruthless, cold-blooded pedophiles, witches, sexual deviants (pornographic in nature), debauchery;  incidents that transform his behavior, twist his reasoning; conforming, leads to survival. Director/writer Vaclav Marhoul, filmed “The Painted Bird” in black and white; without color’s distraction, featuring men and women at their basest, ugliest; their immoral, wanting souls exhibited on their unsightly, repellent faces; wickedness, so keenly depicted, excruciating to watch.

One episode focuses on a bird keeper; he paints the wings of a bird and joyfully sets it free to join its aerial flock, fully aware that it will be shunned, tortured, killed for its inconsistencies; because of his Jewishness, a juvenile is deemed worthy of abasement, humiliation, degradation, death; a metaphor for the six million Jews annihilated in WWII.