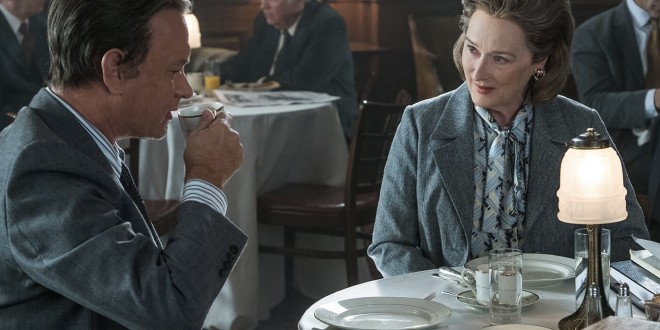 Possibly, not the worst, but far from the best of times; the Vietnam War (1955-75) transformed the Western world, heralded the death of idealism, giving birth to post-modernism, erasure of naivety; “The Age of Aquarius” (The 5th Dimension) is in full swing, gifting sexual license, mind-enhancing drugs, anything to escape the reality of government culpability; lying Presidents who allowed American boys to fight and die a winless Asian conflict; deaths of fathers, sons, lovers still resonate as worthless sacrifices.

Steven Spielberg with the prescient talents of Meryl Streep (Katherine Graham, Publisher) and Tom Hanks (Ben Bradlee, Editor) in “The Post” gives voice and meaning to the Fourth Estate, freedom of the press; in 1971, the New York Times and Washington Post had access to the Pentagon Papers; Daniel Ellsberg, a former US military analyst, had first-hand knowledge of political duplicity in the escalation of the war, (and leaked it to NYT’s writer Neil Sheehan); the films follows the path to perdition or salvation of the First Amendment.

In today’s “Me Too” environment and the splaying of male sexual misconduct, aka the “predator” of the day, in newspapers worldwide, “The Post” is an intelligent, introspective purview of a woman’s battle to be recognized as a worthy and legitimate force, in a testosterone-driven milieu;  uninvited, the challenges were massively overwhelming. Streep, intuitively interprets Kay’s femininity and logic while weighing the advice of her Board and editor; Hanks as Bradlee is tough but has a grudging respect for Katherine; eventually her mettle conquers and cements his admiration. “The Post” magnificently and with depth grasps and presents the intensity of the times; would their struggle and decision result in ruination? Imprisonment? Without cell phones, expediency of the internet, a pay phone was the ultimate, “deep throat”, the tenuousness of the times is bludgeoning. The film also soars with the printing process, before the digital revolution; labor intensive,  preparation of the plates, rollercoaster acceleration of the finished product.

“The Post” concludes with the Watergate break in (June 17, 1972) an example of one man’s paranoia, eerily forecasting the psychosis, exhibited by the present-day leader, of the free world.