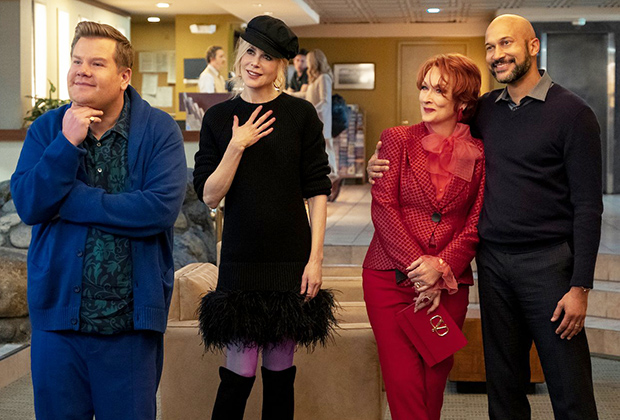 Universally panned, especially James Corden for his stereotypical portrayal of a gay Broadway performer, which I did not find offensive; the major criticism heralded from the LBGT community on his interpretation (Director Ryan Murphy applauded) of “Barry”, Corden is straight. Desperately seeking positivity in this pejorative, superfluous imitation of a Broadway musical, focusing on four (including the aforementioned “Barry”) “over- the- hill” thespians: “De Dee Allen”, Meryl Streep gives a weighty depiction of a self-absorbed, vanity vulnerable star, warding off the specter of imminent dotage; “Angie”, Nicole Kidman’s ceaseless legs star in her diaphanous, achingly saccharine portrait of a flagging chorus girl; “Trent”, Andrew Rannells, gifts a “campy” execution of an overlooked, discarded Julliard alumnus; the group define themselves as “cultural disrupters”; Jo Ellen Pellman as “Emma” was reason alone to invest in “The Prom” soaring with an immaculate voice, her refreshing genuineness as a teenager, owning her sexual proclivities and wanting to flaunt them, is clinched in honesty.

“The Prom” despite its problematic length, excessive schtick, gagging predictability, had its moments: energetic, formidably frenetic choreography (Casey Nicholaw, choregrapher), hummable lyrics, and an emotionally pulverizing message of “inclusivity” an antidote for the “cancer of intolerance”, an epidemic of toxicity that must be vaccinated, eradicated.