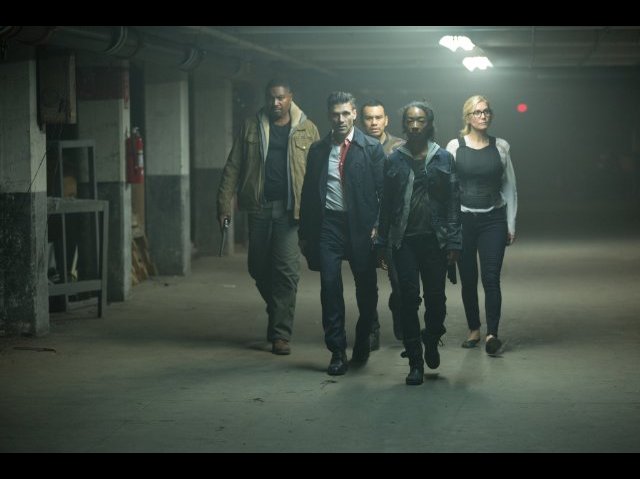 Paris. Yemen. Tunisia. Turkey. Paris. California. Brussels. Orlando. Nice.  The list is interminable of those whose mission is to indiscriminately destroy the “other”; having ignored the first two “Purge” films I “elected” to see what the hoopla was all about. The premise is egregiously repulsive: once a year, from midnight to dawn anarchy reigns, accountability is non existent; rape, murder, bombings are legitimate, parents kill progeny and vice versa; the ultimate goal is to rid society of the homeless, disenfranchised, eradicating those who do not conform to the norm; it is sickening, a philosophy embracing moral turpitude at the basest level.

Director James DeMonaco’s action packed formula works well as protagonists “Leo Barnes” (Frank Grillo) and”Senator Charlie Roam” (Elizabeth Mitchell) flee the demonic hierarchy trying to thwart her run for the Presidency (her platform focuses on the elimination of “purge” night). Armored trucks, drones, mendacious marauders and a righteous underground season the film with enough thrills to ward off ennui. But at its heart, resonates the divide in today’s milieu, diminishment of the middle class, fear and hopelessness growing exponentially as the gap widens; lack of religious tolerance practiced by those bent on destroying the equilibrium of the free world; daily we are plagued by the horrendous actions of these misguided, lost, soulless individuals.

“The Purge: Election Year” flirts with a frightening, realistic hypothesis; this is an election year and its message lacks subtlety, pungently pulsates with truth.