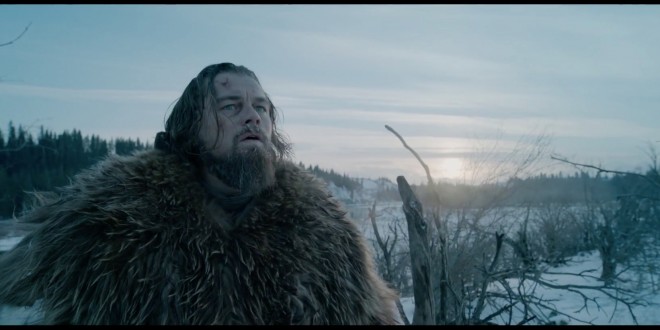 “Man is not himself only, he is all that he sees; all that flows to him from a thousand sources. He is the land, the lift of its mountain lines, the reach of its valleys.” Mary Austin

Director Alejandro G. Inarritu and actor Leonardo DiCaprio lionize legendary Hugh Glass, a trapper and frontiersman, a man who in the early 19th century survived a catastrophic grizzly bear attack; he is the spirit (revenant), relentlessly clutching life for the ultimate satisfaction, vengeance for an unjustified homicide; and it is served cold, frigid.

Leonardo DiCaprio, a marvelous method actor, admits that after portraying this enigmatic character his intrinsic core has been transformed; for six months, in the harshest of conditions he and his fellow actors endured nature’s unpredictable, tumultuous whims: mercurial temperature swings, freezing waters, unannounced avalanches; nature’s goodness and vindictiveness lacked all discrimination in meting its potency.

1823. Glass and his crew are working for the Rocky Mountain Fur Company; beaver pelts are their bounty; realistic, gutsy/gory skinning of these hides is a segway to  a clandestine, bloody attack by Native Americans, lusting to wrest the interlopers from their land. The French are also still a presence in North America, exacting their own savagery against the indigenous tribes.

More than the story, history of the era, it’s the landscape, terrain photographed with utmost respect and genius by academy-award -winner Emmanuel Lubezki, that captivates and mesmerizes viewers of  “The Revenant”; utilizing only natural light, Lubezki is the embodiment of the revenant, spirit embracing, quietly wooing every mountainous crevice, imbibing in crystalline streams; undulating mists, untainted sunsets, untrammeled valleys, all signifying an uncompromising but reverent marriage between man and the environment that molds his mettle.