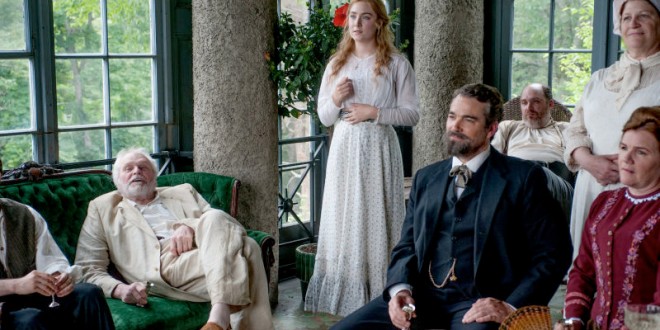 Anton Chekhov (1860-1904) an iconic Russian playwright excavates, with brilliant acuity, the artist’s poetic license, hubris, and fragile temperament. “The Seagull” is the most autobiographical of his major works, brutally vivisecting every character’s unappealing foibles; escaping his caustic pen, impossible! Written for the stage, the film initially stumbles, but corrects itself, with the profundity of the acting. Annette Bening gives another remarkable, compelling performance as “Irina” a grand dame actress, in the Shakespearean league; her vanity, entrenched megalomania, powerful charisma, captures and controls men half her age.

The action takes place on the bucolic estate of Irina’s brother “Sorin” (Brian Dennehy) in a perpetual holding pattern between life and oblivion. Irina has brought her much younger lover, “Boris” (Corey Stoll) a writer of renown, with a weak and flaccid character. Stunningly wonderful are Saorise Ronan and Billy Howle as “Nina” and “Konstantin”; Nina’s love for Konstantin is shattered by Boris’s famed, palpating sensuality. More than the other protagonists Nina and Konstantin are reflective symbols of the seagulls attributes: Nina, initially loves the freedom and purity of the seagull, eventually equates herself as one; Konstantin, frustrated by his failed authorship and loss of Nina, kills a seagull, leaving it for Nina and forecasting his own demise.

Chekhov’s incisive prose allows each character their solo moment of clairvoyance, recognition of intractable flaws; an ebb and flow between self-centeredness and self- sacrifice; “constant conflict between artistic purity and celebrity vanity”; vulnerabilities unveiled for cruel, unabashed taunting; “love” a weapon of throbbing destructibility, manipulation and cancerous envy. At its epicenter “The Seagull’s” quest, search for the line between the “artist” and the individual, does the gravitas of the artist transform irrevocably the individual? Boris tells Nina of his addiction to write everything he sees, believing all of existence must be memorialized by the written word (Chekhov’s musings) his jadedness versus her idealism elevate the tension, and inevitable collision of opposing forces.

“The Seagull” has moments of dazzling intuitiveness, cunning confusion and revelatory performances, but in conclusion, has a more potent emotional response when viewed on the stage.