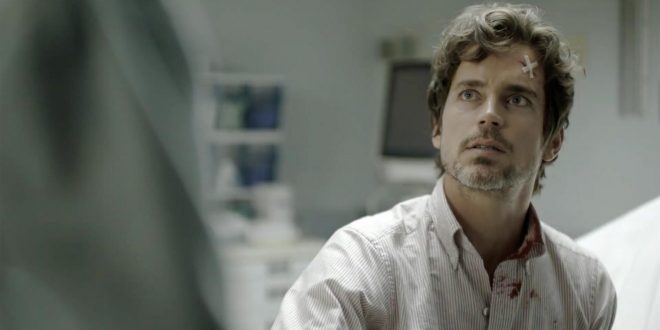 Abashedly, I did not invest in the first two seasons; no apparent reason; the virtual milieu is bloated with multitudes of culprits, “sinners” and their motives, perpetually titillating my curiosity; the third season’s lure was the actor Matt Bomer. Like actors Tom Hardy, Tom Hiddleston, Thierry Godard, Ben Whishaw, Bomer is not dancing at the pinnacle of one’s roster of unmissable performances; but like the aforementioned, has contributed magical, mystifying, unforgettable, complex delineations; starring in the inimitably brilliant series “White Collar” (2009-2014), with his devastatingly debonaire depiction of an ex-convict forced to work with the FBI, cemented my inquisitiveness; in essence a visual stalker.

Bomer is “Jamie Burns” a high school history teacher, admired by his students, inspirational in fertilizing their fecund minds, an expectant father with wife, “Leela” (Parisa Fitz-Henley), is drowning in uncertainty; reaches out to his college friend “Nick” (Chris Messina, cryptically cunning performance), eighteen years have passed since their last meeting; Nick, a Svengali of manipulation, uses philosophy, life’s march toward death, tests to be actualized, barriers pulverized, before a conclusive breakthrough can bequeath freedom; Bomer is stratospheric in the role and Bill Pullman as “Detective Harry Ambrose” matches his acuity scene by scene. Their symbiotic, mesmerizing relationship anchors the scenario.

Tantalizingly twisted; philosophers govern the narrative, especially nihilist Friedrich Nietzsche and his ultimate “Ubermensch”, “one who is willing to risk all for the sake of humanity”, reentering the world through others; striving to overcome the feeling of meaninglessness; Jamie and Harry in extremis confront their similarities and disparities and champion one of the most well-written (Derek Simonds) Netflix Originals to date.

Seasons One & Two are on my agenda.