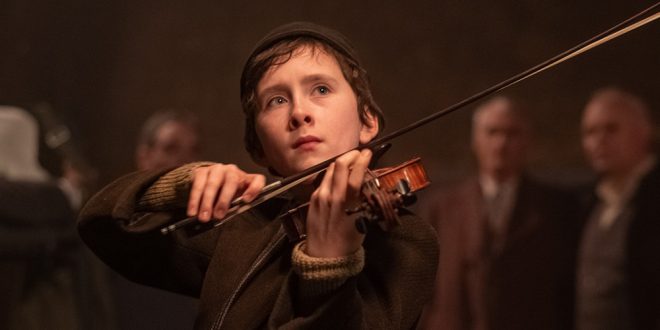 THE SONG OF NAMES

Based on the novel by music critic Norman Lebrecht, directed by Francois Girard “The Song of Names” lacks the heft of substantiation needed for distinction, prominence in the filmic realm; three sets of actors imbue protagonists “Dovidl” (Polish violin prodigy) and “Martin” (son of an impresario), with somber, soulful dignity; an unlikely bonding precipitated by WWII; Luke Doyle, (Dovidl, 9-13) and Misha Handley, (Martin, 9-13) test the boundaries of brotherhood, religion, mores in a manufactured milieu crafted by Martin’s father; Jonah Hauer-King (Dovidl) and Gerran Howell (Martin) capture the torment and trepidation of the boys from ages 17-21, when Dovidl goes missing on the evening of his debut; Tim Roth (Martin) and Clive Owen (Dovidl) give legitimate depictions of the aging duo. Unfortunately, the flashback technique loses its pungency midway through the haunting scenario.

“The Song of Names” musically bewitching, shadowed by the orchestrated demolition of a culture, a people whose tenets refused obliteration; six million perished in the holocaust, their names memorialized by those who remained, assuring remembrance by those who follow.