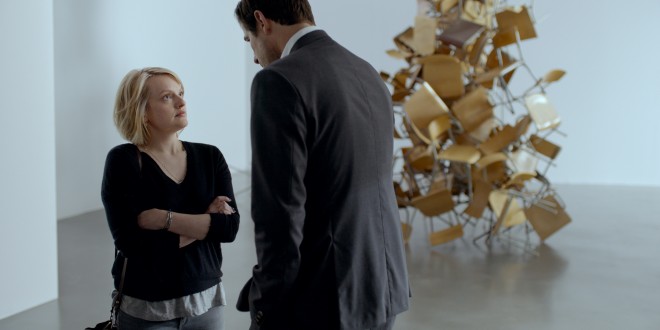 “The Square” in LED lighting strips, glows in the courtyard of Christian’s museum represents a “sanctuary of trust and caring” an equalizer, all who enter share the same rights; yet a PR firm equates it with massive brutality; taxing the boundaries between freedom of artistic expression and the reprehensible/suable. An egregious example of viral-marketing gone amuck; Christian’s suave manipulation is tested when he is held accountable.

Christian’s sleuthing to recover his possessions, stolen in a scam, gift hilarity and precipitate a moral compass, resulting in a belated apology.  Bludgeoned with the truth, by a young boy, into whose life, he had inadvertently reigned chaos. The scenes between the two resonate with conviction, passion and righteousness.

At its core is a black-tie banquet, celebrating major donors to the museum (in actuality, with the exception of one actor, were art mavens); Terry Notany, impersonating an ape, “Oleg” is invited to taunt, terrorize the patrons; as the fierceness of his tirade escalates, mimicking the supremacy of  “one” to mesmerize, mentally cauterize, the “collective”; overwhelmingly “Hitlerian”; Ostlund’s keen facility of mockery and satire, in an earlier scene, has an actual gorilla perusing a book.

Ultimately, “Christian” is a metaphor for the alluring, patronizing, bon vivant; ignoring imperfections, he is comfortable within the altruistic confines of the “square”; simultaneously representing the fractured paradigm, oozing contriteness, recognizing and accepting his liabilities. “The Square” stunningly addresses today’s amorphous morality, its lack of introspection, fuzzy parameters;  brilliantly challenges viewers to think above, beyond, and outside the “square”.

NETFLIX TO THE RESCUE: “A HERO” (PERSIAN: ENGLISH SUBTITLES), “MUNICH: THE EDGE OF WAR”, “MY FATHER’S VIOLIN”